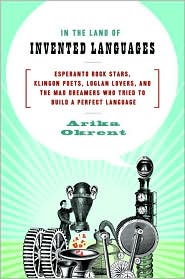 Languages have been a source of personal fascination and interest since an eighth grade French course I took back in the day. I think it is simply amazing that people can look at an object like a tree and have so many different ways to say the word tree. Along with French, I have had an insatiable desire to learn languages like Russian, Japanese, and Arabic. To date, however, I only have a basic working knowledge of Spanish. I am working on both maintaining the Spanish I do know and brushing up on French and Chinese via my Nintendo DSi.

Therefore, this amateur linguist naturally agreed to read Arika Okrent's In the Land of Invented Languages. A professional scholar of linguistics, Okrent put together a witty and comprehensive examination of attempts made by various people over the ages to invent new languages and then try to make them serve as a universal form of communication.

Okrent is a 1992 graduate of Carleton College in Northfield, earned an M.A. in linguistics from Gallaudet, and has a Ph.D. in psycholinguistics from the University of Chicago. One would think with this academic pedigree that a book like this would be dry and academic like my Spanish textbook. However, Okrent wrote with a slight humorous tone, making a potentially dull academic book something fun to read.

I believe Okrent was able to accomplish this by not taking her work too seriously, a trait that is sorely needed in today's world. While she was fair to history by offering both praise and criticism of past language inventors, Okrent also was not afraid to show her personal adventures with languages. This was evident in her quest to learn and become certified in Klingon, the Star Trek language spoke by Captain Kirk's rivals of the same name.

Okrent also offered much in the way of philosophy concerning the languages she was researching.

When language inventors try to bypass convention-to make a language that is “self-explanatory” or “universal”-they either make a less efficient communication tool, one that shifts too much of the burden to negotiation, like Blissymbolics, or take away too much flexibility by over-determining meaning, like Wilkins's system did. When they try to take away culture, the place were linguistic conventions are made, they have to substitute something else-like the six-hundred page book of rules that define Lojban, and that, to date, no human has been able to learn well enough to comfortably engage in the type of conversation that any second-semester language class should be able to handle. (257)

These are significant insights into why invented languages often fail to take hold in common practice. Another common reason for failure, illustrated by Okrent in many places, was the often-eccentric behaviors and beliefs of the inventors. These alone made the book a joy to read. The added academic and humorous qualities contributed brilliantly to make this book a sure-fire winner for those of us that geek out on languages.