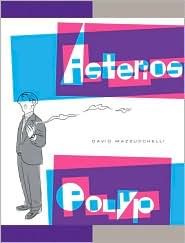 If you read about graphic novels at all, it’s hard to escape the accolades being heaped upon David Mazzuchelli’s Asterios Polyp. If you believe the hype this book is like the second-coming of Jesus here on Earth to show us the beauty and wonder of the graphic novel form.

Really, they (reviewers & readers) are pretty sure Asterios Polyp is the BEST THING EVER. Maybe they’re right and I’m just too dumb for this book. Or maybe they’ve just been fooled by the big words and concepts and the hype.

It’s probably a little bit of both.

Asterios Polyp is a crusty, snooty “paper architect” (which means he’s good on paper but his designs have never actually been built) who lives in a sparse, modern, designed-within-an-inch-of-its-life condo and has all kinds of pompous attitudes about just about everything and isn’t afraid to share them. I kind of loved him. The novel opens with his swanky condo building being struck by lightning and burning to the ground. Asterios buys a one-way ticket to Hicksville and there begins a new salt-of-the-earth type of existence.

While we watch Asterios discover himself in this small town devoid of all of the fancy pants affectations he had in the city we get flashbacks about his past and his ex-wife Hana, how they met, and how their marriage fell apart.

Frankly, the story is kind of cliche. Who hasn’t read the big city snooty snoot goes to the country and learns about what life really means while reflecting on his past mistakes story? It’s old hat. Sure Mazzuchelli brings a few quirky touches to it that are enjoyable, like the flashbacks being narrated by Asterios stillborn twin brother Ignazio. But still, I’ve read it before.

So that leaves the art to bring some deeper, fresher meaning to this old story. That’s where I think I’m too dumb for this book. I know the art is doing some stuff here, but I’m not exactly sure what it is. Perhaps my knowledge of art is too lacking. That being said, the bits and pieces that I did get really blew me away. There’s an image where Asterios explains to Hana why his apartment is riddled with hidden video cameras and how it makes him feel a little less alone like he has a video doppelganger, and the final video of this scene is an image of Asterios and Hana curled up on the bed smoking, and looks as though they are twins in utereo.

There’s also a virtually wordless retelling of the story of Orpheus and his journey to the underworld that is nothing short of amazing.

It’s that kind of stuff I can appreciate and I suspect there is a ton of it going on here, it’s just that a lot of it is lost on me. It makes me think that maybe Asterios Polyp is one of those books that is better the second-time around. Right now, even as I’m writing and reflecting on it, I’ve discovered that I did, in fact, enjoy this much more than I thought I did. It’s a challenging book with a lot to offer, which can be frustrating at times but is kind of refreshing.

However, I do have to say the ending is a big, fat, steaming pile of suck. And not just because it’s not a traditional and they all lived happily ever after, but because it’s a crappy Deus Ex Machina type of bullshit that makes me feel like the writer wrote himself into a corner and didn’t know how to get out of it.