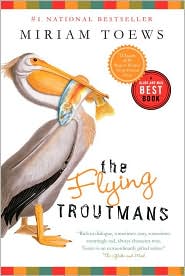 If you liked “Little Miss Sunshine”, then you're bound to fall in love with The Flying Troutmans. Filled with dysfunction, this novel by Miriam Toews has an equal amount of heart and some good old-fashioned road-tripping.

The story involves Logan and younger sister Thebes dealing with their mother, Min's, life-long battle with depression which once again has reached a point of hospitalization. Bed-ridden, Min refuses to talk or eat, and the children are left to retreat into their own neurosis. Ultimately, a call is made to Min's younger sister and only other surviving member of the Troutman family, Hattie.

Just twenty-eight and fresh off a break-up, Hattie flies from Paris to Canada to take care of her sister's family. It is clear that she is way out of her depth, especially when Min asks her, “Please help me die.” Fighting a nervous break-down, she decides to find the children's father. With only a beat up van and a vague sense of where she's going, the remaining Troutman's take off across the border into America's heartland.

How do you feel about this whole, you know, odyssey?
Odyssey?
Like, this trip we're on. What are you thinking?”
-pg 126

The book maintains no classic punctuations between the character's thoughts and verbalizations. Keeping the quotations out is strange, but the reader gets used to the free, flowing feeling; an effect that enhances the novel.

Toews also gives her characters depth through flash-backs on Min's years of depression.

I phoned the hospital again and asked to speak to Min. The nurse told me that Min did not want to talk to me. I know, I said, but I don't think she means it.
She'd prefer not to see you, said the nurse.
What about her kids? I said.
Min doesn't want any visitors, said the nurse.
I wasn't surprised. I had refused to help her die and her kids reminded her of important reasons to live. She had done this before when she was deeply psychotic, turned her back, flipped us the bird, walked away.”
-pg 53

The story is so rich you may need a good dose of anti-depressants to make it through each page. And yet, you can't help but dive further into the angst experienced by Hattie, Logan, and Thebes. It's true that depression affects more than just the sufferer and this book makes it poignantly so. Even though the character of Min is absent for most of the novel, she is always on the mind of the three passengers as they journey to self-discovery and figure out how to cope with the depression.

Like you know when it snows in May? said Thebes. How much that sucks?
Yeah, I said.
I don't let my brain accept the word snow, said Thebes.
Hmm, I said. Okay, so?
I pretend it's something else, she said.
The snow? said Logan.
Yeah, she said.
-pg 110

To purple-haired, artistic Thebes, and pensive, basketball fanatic Logan, Hattie is not so much an aunt but an older sister. Each bonded by the love of Min and the realization that they can't cure her. During the drive, Hattie learns to stop blaming herself for her sister's condition and Logan and Thebes get to enjoy a bit of the youth they've never experienced.

While the ending doesn't solve anything, it does shine a ray of hope. Toews's novel deals with the tough subject of depression head-on and her characters are bravely written. The Flying Troutmans is hard to put down and definitely worth the ride.