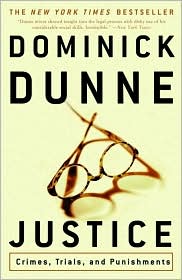 How does that old saying go: “Every time a writer dies, Christa buys one of his books?” Dominick Dunne’s death was like a magnet to the True Crime section, where I yanked the only Dunne in the store, Justice: Crimes, Trials, and Punishments. His body was barely cold when I scanned my debit card.

This is a collection of the crimes Dunne covered after deciding when he was oh-50ish to become a writer. It opens with his personal essay on the death of his daughter Dominique Dunne, the sassafras older sister from “Poltergeist” who was murdered by her boyfriend not long after one of the greatest movies of all time was released. From there, Dominick Dunne writes about high-society crimes, with about half of the book devoted to his most-famous pieces on the OJ Simpson trial. Also included: Erik and Lyle Menendez, two pimply California boys who shot their parents; the unsolved Martha Moxley murder in Greenwich, Conn., where Dunne gets some exclusive info that eventually leads to the indictment of Michael Skakel.

If I ever claim to not be interested in salacious celebrity gossip, grab me, shake me, and remind me of “The Dunne incident of 2009.” Dunne concedes that at different parts of this book that people just tell him things. He is pulled aside by butlers, receives anonymous tips, and is invited to dinner parties where people spill juice that goes in his ears and into the pages of Vanity Fair. His work is like a Truman Capote and Page Six lovechild. The worst part is that this book isn’t even new, and I’d soiled it with the amount of spittle I usually reserve for a “Keeping Up With the Kardashians” marathon. (Oh, BTW, the Kardashians get plenty of shouts, since the late Robert Kardashian was close to OJ).

Make no mistake: This is not quality journalism. Dunne formulates his opinions early and loudly, and never uses “innocent until proven guilty” as an excuse to hold his horses on, say, his opinion of the Menendez Bros (guilty) or OJ (so guilty that Dunne probably needs at least three more Simpsons to divvy up the punishment he would want exacted on the former football player).

Some of the Simpson sections are a bit repetitious since they were written during an on-going trial. Dunne occasionally doubles back to reintroduce players and back stories. I’ve also seen criticism of his name-dropping, which I think is hooey. It isn’t name dropping if this is actually the crowd with which you run. And for Dunne, it is. Granted, he had to do a bit of clawing to get a spot at the table. But they kept him around, and continued to tell him stuff.

I’m totally going to read one of his novels.