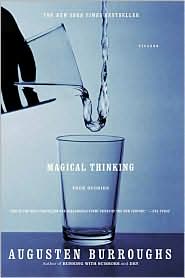 I read Magical Thinking on recommendation from a friend who understands and appreciates my intense germaphobia. She had read his essay entitled “Rat/Thing,” where Burroughs goes into his bathroom in the dead of night and discovers a “rat/thing” in his bathtub. What follows is one of the most hilarious (“this meant, naturally, that I would be unable to take a shower again for the rest of my life. Only sponge baths with Evian.”) and animal-cruelty riddled (the rat dies) accounts of rodent capture I've ever read. And I was hooked. I read the rest of the book with zest, but, when all is said and done, I'm not sure about Mr. Augusten Burroughs and his Magical Thinking.

Some of the essays were hilarious. Others were tender. In “Total Turnaround” Burroughs has a fight with his significant other over lotion. . . but, of course, the fight isn't really about the lotion. The intimacy of the details and the final conclusion show the ugliness and beauty of a committed relationship.”Unconditional love. That's what this is. I love him, as is, fully. . . Even when we fight, we fight inside the container of good.”

But, I have the feeling that if Augusten and I met at a party, I'd smile politely and move along to the punch bowl. Some of the essays really bugged me. And by “bugged” I mean I very nearly put the book down, hilarious and tender or not. In one, “And Now A Word From Our Sponsor,” he compares baldness to breast cancer.

Women just smirk at baldness, as if it's cute. How adorable would they find it if they began to lose their breasts in their twenties? If both tits just shrunk up-unevenly I might add-and eventually turned into wine-cork nubs?” [They do, Augusten, it's called childbirth and breastfeeding.] “Then it would be a different story. Then men would get the pity they deserve from women, as opposed to the smirks. There would be little ribbons you could wear on your jacket for Baldness Awareness Month. There would be marathons where people wept openly as bald men crossed the finish line, smiling and wiping sweat from their fleshy heads. As far as I'm concerned, baldness is the male breast cancer, only much worse because almost everyone gets it.”

Dude, seriously? How narrow is your scope? Should someone tell him that women who have breast cancer also, almost always, go through baldness as well? Or perhaps someone who has male breast cancer could have a chat with Burroughs about which is the preferable illness. But, I kept reading, because sometimes I just don't have the same sense of humor as some folks.

The only other criticism of the book I have is that the writing needed to be tighter in some places, and re-edited for publication as a collection. He writes, “I killed a mouse that crawled into my tub once, and I still feel guilty about it, ten years later.” It may have been ten years since that essay for him, but for me it was fewer than 100 pages ago, and I remember it, thank you very much. How about editing the essay to reflect that you know your readers have already read “Rat/Thing” if we're reading in the order you wanted us to? (And yes, it's this kind of petty detail I turn to when someone compares baldness to breast cancer.)

I'm giving Augusten Burroughs one more chance. I'll read Running With Scissors (recommended by the same friend). . . because there were several essays in Magical Thinking that made me laugh and/or tear up. But, he's on probation.