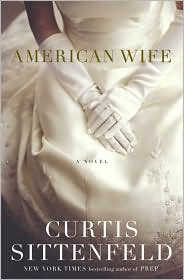 I could tell you a lot of things about American Wife, Curtis Sittenfeld's thinly veiled and thickly fictitious “biography” of Laura Bush.

I could risk being sexist and say it's a book best enjoyed by women. I could say it's at its best when Sittenfeld writes about how the death of a teenage boyfriend still haunts her main character, Alice Lindgren, even decades later. I could tell you that Sittenfeld's prose is calm and lyrical and that the frequent sex scenes are so frank they're more squirm-inducing than arousing.

Instead, I will tell you about my favorite aspect of American Wife, which is its suggestions for tactics in class warfare.

When Lindgren, a composed and modest elementary school librarian from Riley, Wisconsin, marries into the rich, self-satisfied Blackwell family, it is assumed (by her gargoyle of a mother-in-law, mostly) that she is a social climber with dollar signs flashing, cartoon character-like, in her eyes. The greatest thrill in American Wife is to see how Lindgren counteracts this. She does not fight back right away and does not try to seek the approval she knows will never come.

With decorum, patience and a firm but quiet belief in her own self-worth, Lindgren lets the Blackwell family stew in their own smugness, their racism, their misaligned belief in their own superiority. It's a sick pleasure to see the cracks in the Blackwell empire grow. Going to Princeton doesn't mean much if you got bad grades. Getting checks with lots of zeroes from Daddy is great, until you turn forty and realize that after all these years, you don't really have a job. Drinking all day is fun until you realize this hobby has a name and it is “alcoholism.” As the flaws begin to show, it's only Alice ? Alice, with her impeccable grades from an adequate Midwestern school and her career experience and knowledge gained from the lessons only a life actually lived can impart ? who is standing firm. Her every victory, I feel, is an entry in the “Middle Class” column.