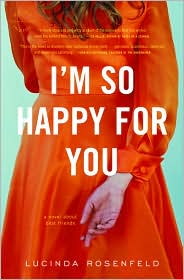 Congratulations to Lucinda Rosenfeld, who has created the least likable protagonist in the history of fiction for women by women. To the readers of I’m So Happy For You who laud the honest portrayal of female friendships, I say, “Who the hell are you hanging out with and why?”

Wendy Murman, a 30-something editor for a lefty political magazine, is singularly focused on getting preggers with her unemployed, stoner, screenplay-writing husband Adam. Meanwhile, all of her friends are shooting out kiddies like their hoo-ha is the mouth of a water slide. To make things worse, her frenemy (you can punch me for using that word) Daphne — a beautiful drama queen whose life is a layer cake of disasters — has ditched her married boyfriend and stumbled into a blissful relationship with the loathsome Jonathon. Six weeks later, she’s engaged, renovating a museum-esque brownstone, then married, then pregnant. With each success that Daphne achieves, Wendy becomes a little more psychotic. She snarks out in her toast at Daphne’s wedding; She defiles her shower gift for Daphne.

Wendy is an insecure, caddy, selfish, jealous, gossipy woman who revels in the misfortune of the people around her. She only sleeps with her husband when she is ovulating. Hobbies include spite and toxicity. Do people really act like this? God, I hope not. What a waste of time. But they must, because Rosenfeld wrote it and people are reading it and relating to it. My god, women. Why do we hate ourselves so much?

This is a disappointing novel from a writer I have liked in the past. Rosenfeld had a short story published in a compilation called Dumped a few years ago. It was about a short-lived relationship with Pablo Miles, a dude who is so offensive that it is actually hot. It was a chapter from the novel What She Saw. . . in which each chapter is about a man who has come and gone, and if I recall correctly, it is very well-written, funny, charming, smart. Possible my standards were different then. Or possible that either this novel or that one was a fluke.

Much of I’m So Happy For You it is told in uninteresting E-mail dispatches sent to friends. (This is also strange. Did Rosenfeld write this novel in 1998 and just publish it? The main character has a land line and has to do some complicated logging onto the Internet, which seems really false in 2009. It’s like Wendy is the Laura Ingalls Wilder of Brooklyn.)

Whatever. I feel like I have to wash out my eyeballs and bleach my brain and pretend this book never happened.