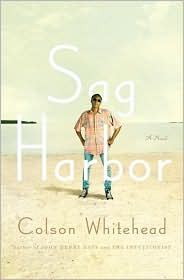 Colson Whitehead’s coming-of-age novel Sag Harbor defies the conventional definition of novel in that it doesn’t have one of those pesky plots weighing it down. This is something a reader should understand before reading to avoid all sorts of failed Aha! moments: Nope. This isn’t going to be about an 80s child, fatally wounded in a BB gun fight. Nope. This isn’t going to be about coveting thy friend’s summer girlfriend.

Whitehead admits this himself in his video pitch: “There’s no dead body,” he says as he wanders the streets of Sag Harbor, linking his novel to Stand By Me, and deflating my ego. I thought I was being really clever when I thought to myself while reading “This is a lot like ‘Stand By Me’ without a dead body.” Boo. There are no original thoughts left.

Who needs a plot, anyway? Obviously not me. I was charmed silly by Whitehead’s more-true-than-fake novel about Sag Harbor’s community of middle-class black families. Benji and his brother Reggie are in high school, and spend mostly unsupervised summers wandering around doing stuff with a group of friends I struggled to keep straight. It reads more like a collection of short stories: The incident with New Coke, the time Benji gets shot in the eye socket, when Lisa Lisa comes to town. Off-stage, Benji’s parents are part of a different novel that taints his story. His dad, a doctor, may be a grill master but he is drinking too much. There are fights so loud that Benji has to shut the windows to keep his family’s business private. His mother is obviously frustrated. Maybe even stuck. Reggie finds a list of “cons” about their father next to the bed.

There is also the idea of reinvention. That teenager compulsion to take summer to change yourself. Get your braces off, discover new music, maybe plan that next school year you will incorporate a pair of heavy boots into your wardrobe. Benji is also suddenly severed from his younger brother for the first time. They are no longer identified as “Benji-n-Reggie,” they are sleeping in separate bedrooms, and Reggie has a whole Run DMC routine worked out with one his friends and it doesn’t include Benji at all. It is this reinvention idea that really resonated with me. I spent the summer between sixth and seventh grade writing short stories about who I was going to be the next year. Oddly enough, I’d decided on becoming a girl who wore poodle skirts and pony tails with ribbons. This did not happen.

I’ll admit that this is one of those novels that went up by a single star on my personal ranking system when I read the last page. (The last time that happened was when I read The Winter of our Discontent.) Something happened on that last page that left me charmed instead of just satisfied.