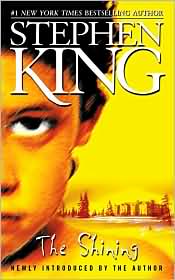 I grew up believing that Stanley Kubrick's movie “The Shining” was the epitome of horror. Jack Nicholson? I mean, come on! And Jack Nicholson with a big ax screaming “Heeeeeeeere's Johnny!” after smashing through a door? Is there greater horror than this? Yes, there is. And Stephen King knew it when he wrote The Shining. He knew that the greatest horror is that of our own humanity, and what can happen when the complex layers of love, marriage, family, alcoholism, a “special” child, and, yes, the supernatural, all blur malevolently together.

Still reading? Alrighty. . . must need some further convincing. What strikes me the most about King's The Shining is the complexity of the characters, and the way he knit the plot so that each event was its own individual, fresh thread, but they wove together in such a way that I found myself thinking “Of course he would do/think/say that. Because of this/that that happened before.” Basically, Jack and his wife Wendy and their son Danny move to the Overlook Hotel in Colorado for the winter so Jack can be the caretaker for the hotel. He's just lost his job as an English teacher at a private school because of his temper. The family is hoping some “quality time” together will help them repair the damage alcoholism has caused and it solves the problem of room and board for several months.

Even without the supernatural element, King develops the characters to the degree that reading this book becomes like watching a car crash from the side of the road. You see it all coming-the anger, the violence, the mistrust and questioning, the isolation, the insanity. The ghosts and ghouls are really just frosting on the cake.

Jack is a newly recovering alcoholic with a wife who is as deeply in love with him as he is with her, and they have a boy who has some extraordinary abilities. One of the most striking elements of the novel is that Jack, though he becomes a villain of sorts, is a really nice guy who has made a lot of mistakes and is trying really hard to make up for every single one of them. He's flawed and he knows it. His wife and son know it and love him anyway.

They have all the elements of a family that can truly make it in this world-except that they're human. They get angry and are sometimes slow to forgive. They jump to conclusions and sometimes assume the worst. So do I. So do you. And it's this truth in character-the multiple layers of not just Jack, but Wendy and Danny and Mr. Hallorann and even the hotel itself-no one is pure evil. No one is a pure victim. And, just like watching the accident, readers can draw a map of how the destruction of this family happens slowly, one event at a time.

This book also really shows how the publishing industry has silenced writers-often for good, but sometimes as a detriment to the story. There were many elements of this novel that could have been cut. They were “unnecessary” to the plot or to character development. Several times I read lines or scenes and thought “if this book was being published now, this would have been cut out.” But, back in 1977, King had free reign of the page, and it's a refreshing change from the clipped, stripped fiction presented so often in the present age. For example, Mr. Hallorann says to Danny:

Danny? You listen to me. I'm going to talk to you about it this once and never again this same way. There's some things no six-year-old boy in the world should have to be told, but the way things should be and the way things are hardly ever get together. The world's a hard place, Danny. It don't care. It don't hate you and me, but it don't love us, either. Terrible things happen in the world, and they're things no one can explain. Good people die in bad, painful ways and leave the folks that love them all alone. Sometimes it seems like It's only the bad people who stay healthy and prosper. The world doesn't love you, but your momma does and so do I. You're a good boy.”

A hasty editor would take a pen to that paragraph and cut it to hell, citing unnatural dialogue, telling rather than showing, etc. etc. And maybe it's a tad self-indulgent. But, what a gem: “but the way things should be and the way things are hardly ever get together.” And if there's a theme of this novel, that's it. Neatly hidden away in a secondary character's monologue.

I won't say Kubrick butchered The Shining. . . but the movie he gave the same name to is not a fair representation of King's novel. The movie is horror; the novel is horrific. And the depth of these characters (whom the movie made stock and stereotypical) and the intricacy of the plot makes this book worth the read a hundred times over.