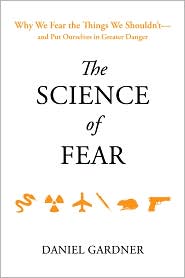 Daniel Gardner's recently reprinted book The Science of Fear is an attempt to help people reconcile their gut and brain when it comes to being unreasonably afraid.? Whether it is terrorism, economic disaster, or just a garden-variety fear of dying, Gardner's approach is to show people how their guts use fear to take control of their brains, despite the often-overwhelming evidence that suggests one is safe. Gardner examined how people succumbed to massive public fear campaigns over events like 9-11, silicone breast implants, and smallpox.

The following passage is typical of Gardner's reasoning throughout the book. He is big on figuring out risk probability, which is important to build a perspective on what makes people unreasonably fearful.

Call it “denominator blindness.” The media routinely tell people “X people were killed” but they rarely say “out of Y population.” The X is the numerator, Y is the denominator. To get a basic sense of the risk, we have to divide the numerator by the denominator-so being blind to the denominator means we are blind to the real risk. An editorial in The Times of London is a case in point. The newspaper had found that the number of Britons murdered by strangers had “increased by a third in eight years.” That meant, it noted in the fourth paragraph, that the total had increased from 99 to 130. Most people would find that at least a little scary. Certainly the editorial writers did. But what the editorial did not say is that there are roughly 60 million Britons, and so the chance of being murdered by a stranger rose from 99 in 60 million to 130 in 60 million. Do the math and the risk is revealed to have risen from an almost invisible 0.0001 percent to an almost invisible 0.00015 percent. (163)

The media was a favorite target of Gardner.

Risks can be described in either of two ways. One is “relative risk,” which is simply how much bigger or smaller a risk is relative to something else. In the birth-control patch story, “twice the risk”-women who use the patch have twice the risk of those who don't-is the relative risk. Then there's “absolute risk,” which is simply the probability of something happening. In the patch story, 6 in 10,000 is the absolute risk. Both ways of thinking about risk have their uses, but the media routinely give readers the relative risk alone. And that can be extremely misleading. (164)

Gardner's book is full of logical conclusions about fear, but it does not offer any tools or ideas on how people can begin to balance their gut and their head. In my opinion, this is a glaring weakness. If one only offers an exposition about what is wrong and does not offer any substantial insights on how to fix it, what good is it? It is not enough to show people how their fears are irrational or unreasonable. To take the reader to the next level, one needs to offer potential solutions to problems, not just tell us the problems they see. Gardner is a journalist, so his natural inclination would seem to just tell and not offer. However, managing fear involves one learning how to balance mind & gut, and this book does not help in that realm. Thankfully, there are many quality books and teachers out there that help one learn this balance.