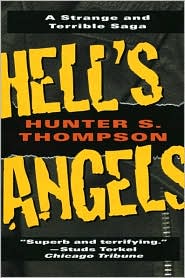 Is there anything more delicious than when the infamous writes about the infamous. I’m hardly one of those whacked-out Hunter S. Thompson-ophiles, but Hell’s Angels, his nonfiction-ish account of spending the mid-1960s with the motorcycle club as it revved its way into mainstream media is a total kick.

Thompson follows their runs, when the group converges on a city, which preemptively terrorizes the locals, who envision all the raping and pillaging they are about to have foisted upon them. It’s not a basis-less fear: the Angel’s are known for brawls and gang bangs — although they tend to reason that the women they encounter know what they are in for. He writes about their commitment to uncleanliness, the bikers’ uniform and the rumors of inner-circle homosexuality. The drinking and the drugs, and their day jobs — or lack thereof — and seemingly pedestrian pursuits. As they grow in popularity, the Hell’s Angels become publicity seekers who eventually want to charge money to share their stories.

Associating with Hell’s Angels does little for Hunter Thompson’s reputation with his neighbors, and he is evicted when there are complaints about these visiting motorcyclists and their wild ways. In my favorite moment of the book, Thompson turns to the reader to confess that the really bad stuff wasn’t even done by Hells Angels. Their visits, he says, were just loud music, a few bikes on the sidewalk, and an occasional shot out back window.

Most of the bad action came on nights when there was no Angels around: One of my most respectable visitors, an advertising executive from New York, became hungry after a long night of drink and stole a ham from the refrigerator of a nearby apartment; another guest set my mattress afire with a flare and we had to throw it out the back window; another ran wild in the street with a high-powered Falcon air horn normally carried on boats for use as a distress signal.”

Not to mention the time a visiting poet chucked a garbage can under the wheels of a passing bus.

In the last third of the book, Thompson gives the Angels a bit of access to his life. This is where the Angels start hanging out on Ken Kesey’s land and taking LSD, which strangely mellows them out. There is Neal Cassady and Allen Ginsberg and nudity and police cars.

(Obviously I’m going to have to read Electric Kool-Aid Acid Test now, since I enjoyed this so much.)