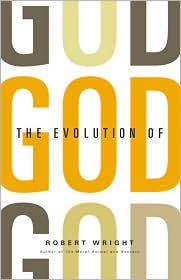 Robert Wright?s The Evolution of God is an ambitious endeavor indeed. I?ll admit a certain level of skepticism at the onset, as anyone who claims to break down over five thousand years of God?s evolution in just over five hundred pages will have to be quite the scholar. Wright certainly has the credentials to do such work, as he is an accomplished journalist and academic.

As one would expect from a writer of Wright?s caliber, The Evolution of God is a quality work of theological inquiry and criticism. Starting with what Wright called primordial religions, he started to build a line of evidence that shows how the way humans view and interface with God over the ages has evolved into the God of the present day Abrahamic religions of Judaism, Christianity, and Islam. Wright drew on a lengthy bibliography of scholarship and a careful examination of both history and scripture to bolster his evolutionary claims.

Wright?s argument is strong. As a student of both religion and philosophy, I immediately recognized the quality and authenticity and I agreed with many ideas brought forth by Wright. However, something was not quite right. The line from primordial religions to modern day seemed to be rather neat and straight, which is often a cause of concern as most things human are neither neat nor straight. I had a hunch early on and it was confirmed when I finished the book. Wright?s argument is incomplete because it does not include all religions; it only considered the Abrahamic faiths.

I had to read the introduction a second time to ensure that my claim of an incomplete argument was founded. At no point did Wright say he is intentionally not examining non-Abrahamic faiths. However, his examination fails to consider the religious beliefs of roughly half of the world?s population. In fact, Wright?s arguments ignore the contributions of both India and Africa, both areas with religious records that are well over 5,000 years old. Hinduism and Buddhism are significant enough religions to warrant a place at the table discussing God?s evolution. However, outside of a few color-commentary items, Wright did not consider these faiths. He sticks to a strictly Abrahamic-centric focus in this book.\r\n\r\nI suppose one could say that either Hinduism or Buddhism does not view God the same way that the Abrahamic faiths view God, which is why Wright did not consider them. I would tend to agree when viewing these faiths on a micro (or literal) level. However, on a macro level and in my personal spiritual worldview, God is the overarching entity as revealed in the different languages of the world?s religions. This, in my opinion, is the next level of divine evolution and is touched on briefly by Wright.

There is a proven theological formula for dissolving the specialness of different faiths. It?s most famously associated with the Hindus, who seem to have used it as a way to unite different regions that emphasized the worship of different Hindu gods. The idea is that all gods, with their different names, are manifestations of a single ?Godhead.? As an ancient Vedic text put it: ?They call it Indra, Mitra, Varuna, and Agni, and also heavenly, beautiful Garutman. The real is one, though sages name it variously?? (442)

Wright could have evolved this idea further, but he instead regressed back to the Abrahamic model. This is a disturbing trend in The Evolution of God (no limiters applied), which explored how human nature gave birth to religion. It?s somewhat difficult, in my opinion, to explore that human nature when you exclude half of the humans in the discussion.