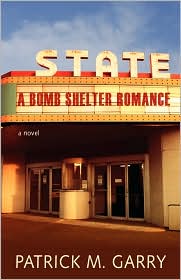 Let me preface my review by admitting that I am an asshole. For every eye roll and every disappointed page turn, I felt like a bigger and bigger jerk. I see what Patrick M. Garry is going for in his novel A Bomb Shelter Romance, a nice slice-of-small-town-life/coming-of-age novel about the summer of 1970 in a rural Minnesota town. Unfortunately, it is a shell of a novel; an outline for what could be an endearing piece of fiction.

Ben O’Neill comes from a big old Catholic family, filled with eccentric siblings. This summer, his family has been charged with finishing construction on what is being called “the last bomb shelter.” It is an embarrassing project for the always-embarrassed 18-year-old Ben. Meanwhile, his brother Jack is the only guy in town in Vietnam, Ben has developed a friendship with a blind man — whom he reads romance novels to when he’s not working in the man’s movie theater or helping to plot?his love life. Ben is recently broken up with Julia, and has his eyes on Suzanne, who is home from boarding school and living with her socially scandalized mother. Also: The town’s baseball coach, the losingest coach in the state, is in the midst of the longest baseball game in history, a 1-1 tie that spans much of the summer.

Sounds nice, right? Cozy like porch swings and lemonade. A little Jon Hassler meets Lorna Landvik meets Garrison Keillor. But it just never breaks past that barrier that turns it from words on a page to the charming story it should be.

The characters are under-developed. Even Ben is a confusing dullard. Socially awkward, yet dated one of the more popular girls in school. His personality is never really revealed beyond the fact that he’s ashamed of this and embarrassed about that. What does he look like? What is he wearing? What are his interests? And Suzanne is really no more than a patient and nice girl, who plays the role of care-taker to her mother. Hair in a ponytail, small necklace. Brad is a blind man, who has a host of one line sayings that are supposed to give him an air of the old sage, who “sees” more than his sighted peers. But they are repetitious, so it is more like “Ok. Gotchya. Brad is really in tuned to his senses. Yup.” One of the great under-utilized characters is Hank, wealthy and a failure at love. He’s in the town jail for infractions involving his ex-wives, but he is on an honor system and able to leave at will to help with the bomb shelter. He is the only character with a sense of humor. At all.

More than being about a bomb shelter, this novel is a romance: Ben’s misguided attempts to get closer to Suzanne, not noticing that she is trying to get closer to him, too. And from there comes a lot of cliched teenage bumbly fumbly. Like much of this book, the reader is told too much and not shown enough.

The good news for Garry is that he obviously has stories in his head. I’ve seen this sort of thing happen before. The first two books I read by Jonathan Tropper were like this, shallow and almost-something. By the time I got to How to Talk To a Widower, his fourth book, there had been a marked improvement. A fantastic novel had been born. Here’s hoping, Mr. Garry.