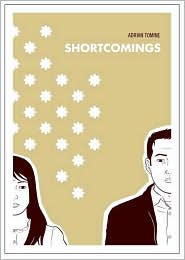 The good thing about reading a mediocre graphic novel like Shortcomings is that it only wastes an hour or so of your life. So really, you can’t get too hopped up about it.

The story here centers around 30-something Bay-area denizen, Ben Tanaka. He’s a cranky, self-absorbed buzzkill of a character who denies that he has a fetish for whitegirls and why that might upset his live-in girlfriend, Miko, a woman who puts together Asian-American film festivals.

Ben, unbelievably, actually has one a friend, Alice a Korean lesbian who is a PhD student at a woman’s college. It really is surprising, because Ben is that unlikeable. He whines about everything, he doesn’t like anything, and he’s the kind of Japanese dude who goes to a wedding filled with Asian people and says, “Boy, they all look alike.”

Early on in the book, Miko ditches out on Ben to take a four-month-long internship in New York. Ben doesn’t take it well, but in only a matter of days he’s hitting on, and eventually sleeping with, every white chick he meets. It’s kind of gross (and again unbelievable because even girls who like pricks wouldn’t like Ben, he whines that much).

I think the book is trying to make a point about race and sex and fetishes, and in one scene they almost get there. Ben, Alice, and Alice’s latest lover are talking about white men with Asian women, and they start to talk about stereotypes and why white men go after Asian women. But, sadly, they never really make a point, take a stand, or come to any conclusions.

Which is why Shortcomings continually comes up short. It’s as though the book really wanted to have something to say but never really got around to saying it.