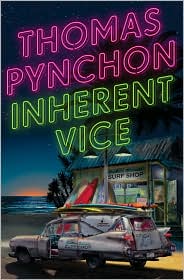 I’m a sucker for chatter and August has been lousy with chatter about Thomas Pynchon’s Inherent Vice. New York Magazine found it too busy; The Washington Post calls it a “page turner” and a “comfort book,” Entertainment Weekly got distracted by the author’s name in neon and gave it an A, but probably didn’t read it.

About every other review at some point calls it a “beach read,” to which I respond: Bullshit.

Sophie Kinsella writes beach reads. The reviewers who are calling this a “beach read” are the same assholes who can lift a 90 pound box with one hand, wipe the dust off on their chinos, and say “I don’t know what’s wrong with you, but that was super light. … Let me take a crack at that refrigerator.” Liars. If you must give Inherent Vice a venue, I’d say it is a hard wood table with a reading lamp, color-coded highlighters, and note cards. At least, that’s how I read it.

The story opens with doper private investigator Doc Sportello in a reunion with his ex-girlfriend Shasta Fay Hepworth, the kind of girl whose life-uniform used to involve bikini bottoms and T’shirts, but has moved on to a relationship with a married real estate mogul Mickey Wolfmann. Shasta wants Doc to do some poking around: Wolfmann’s wife and her boyfriend are plotting a takeover, and have asked Shasta to get involved. Wham-Bam, all of a sudden Mickey and Shasta disappear and Doc is cruising all over Gordita Beach, Calif., a roach clip in his pocket, and an antagonistic cop ruffling Doc’s hippie hair.

On page 100 I closed the book and thought: “I’m going to have to start over.”

Instead I started taking notes on the parade of characters who file in and out of the story. Some to never be seen again, some to crop up 50 pages later. Surfers, rock bands, strippers, drug dealers, lawyers, a motorcycle gang, stewerdii and waitresses. While freakin’ confusing, it is this cast that is part of the fun. Each gets his/her own brief little mythical back story that may or may not lend to the actual plot. It might just be a part of the scenery.

I liked this book in an unconventional way. I didn’t really care what happened, plot wise, because I was having a hard time visualizing how it all fit together anyway. I didn’t, like, rush in the front door to pick up where I left off at the end of a day. It was more like a pleasure cruise, guided by someone who looked like The Big Lebowski. A journey-not-the-destination story.