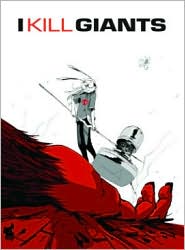 Barbara Thorson’s got a few problems. She’s a smart and smartass weirdo fifth grader with big glasses, problems at home, a fondness for funky head gear, mostly of the animal ear variety — bunny, mouse, fox, and a slew of imaginary fairy friends. She also has a strange hobby, killing giants.

This graphic novel, aptly named I Kill Giants, opens with Barbara telling us about the giants and making a purse to carry around her secret, giant-killing weapon. From there we follow Barbara to school. While the rest of the kids listen with rapt attention, Barbara is lost in a book about Dungeons & Dragons. Eventually, she’s sent to the principal’s office for sassing back to the motivational speaker who came in to talk to her class during parents’ day.

That Barbara, she’s no stranger to trouble or, we soon learn, the school therapist. Barbara’s a little girl with giant problems, even. The school bully is after her, she doesn’t have any friends, and we also learn that Barbara’s Dad’s MIA, something is up with Mom, and her older sister is trying her hardest to keep the house going.

I Kill Giants is one of those books that works so well it’s a mystery. When I try to dissect why it works, I can’t figure it out. The story? It’s not that original. I won’t spoil it, but I saw what was coming a mile a way (and it was oddly reminiscent of the disappointing Too Cool to be Forgotten, though I have no idea which one came first).

The art is pretty stunning, and the characters are just brilliant drawn, but during the climax the art got a little muddy and confusing. And yet, despite all that I actually cried at the end of the book. It’s emotional. Plus, there just aren’t enough books (or movies or anything for that matter) about little girls kicking ass. And make no mistake, Barbara kicks ass.

She kicks all kinds of ass.

However, and this is my biggest problem with the book, she also gets her ass kicked quite a bit. Throughout the novel, Barbara is tormented by big bully girl. The two of them fight, a lot. I think there are three or four fist fights in the book. That’s just not how girls operate. Maybe there’d be one fight. Maybe. But mostly it would be all kinds of psychological warfare and torture. The physicality of their battles really bothered me, and made it seem obvious this was a little girl’s story written by a man.

But again, even with that, I still loved reading this book. It takes some kind of magic to combine words and pictures in a printed form that can actually move a reader to tears, and I Kill Giants has that magic.