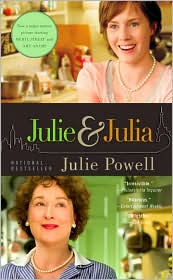 After reading food-memoir-Julia-Child-love-letter-turned-movie Julie & Julia by Julie Powell, I have two regrets: A) I wish I had come up with an idea like this. But not this one. I’m never going to eat liver, let alone saw away at a bone to get to that succulent marrow. And you’ll be hard-pressed in this book to find a moment when Powell isn’t going all Patrick Bateman on something that would have made a fine pet;

B) I wish I’d been following her blog when she was in the middle of this project. Unfortunately, I’ve jumped onto the bandwagon at the point where her Dooce-ian count of readers make comments on her site that rival the jackholes who comment on the Minneapolis Star Tribune’s Web site.

Poor Powell. Unfortunately, when you get popular you can’t pick who likes you or how much. As unsettling as it may seem, someone is probably going all Everest expedition right now in a Long Island landfill looking for that old bustier she wore that one day.

Dear World, consider this my grand “Me, too!” Pardon the pun, but I ate this book right up. That feels a little like saying, “Gosh, Oprah. You were right! Toni Morrison is a good writer!” since the phenomenon has already gone flambe and the consensus of a lot of people who are paid to know what other people will like have already determined that a lot of people will like this story and were right.

The gist for people who don’t follow things like entertainment: Julie Powell is a theater-major turned secretary working in a government office in Manhattan in search of . . . something. While in Austin visiting her family, she turns to her mother’s copy of Julia Child’s “Mastering the Art of French Cooking” and decides to make every recipe (536 of them) in a year (365 days).

Incidentally, that’s a lot of butter.

Powell pottymouths her experiences on her blog, makes aspic, brains and liver, drinks vodka gimlets, smokes Marlboro Lights and loves “Buffy the Vampire Slayer.” Her husband does the dishes. This is basically what all 300-plus pages are like.

Sometimes friends stop by for dinner, and damn if you can’t blame them. There is always wine, and the meal hits the table at 11 p.m. Powell? Well she is so freakin’ likable. It took me awhile to warm up to her personality, but as soon as she was clawing her way into that bone for the marrow I gave in to her charms. By the time she sliced and diced the live lobster, I was making her a mental friendship bracelet.

I’d be lying if I didn’t admit that in a story where the only drama is a woman’s race against a calendar with a recipe book strapped to her back, Powell may have overdone it on the frequent scenes spent sobbing in the kitchen, threats to quit the project and prediction that this will end in divorce. And I have this weird idea that Powell was forced to include the dramas of her close friends so that her publisher could justify the girlie cover they foisted upon the soft cover edition.

All told, this is a smart, refreshing, fun, honest, loud and frank book. I loved it.