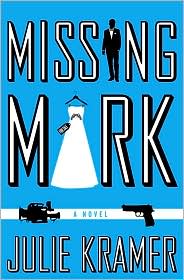 Maybe it’s a guy thing. Maybe it’s just me. Had Julie Kramer’s newest mystery novel, Missing Mark, not been highly recommended I wouldn’t have given it a second glance. To me, the cover looks more like a cross genre of mystery and romance, or at the least, a chick-lit mystery (not that there’s anything wrong with that – just not my interest). But enough about the cover other than to say that – yes, it does make a difference.

The opening scene finds Channel 3’s investigative reporter, Riley Spartz, touring a home looking to buy. Following an awful odor, she finds the body of a man with a knife sticking out of his chest. Excellent hook! Unfortunately, the book shifts focus and the reader is left hanging. Sweeps week is coming and Riley sees an ad in the paper FOR SALE: WEDDING DRESS. NEVER WORN. (p.6) and wonders if there might be a story behind that. Excuse me? A story? Two pages ago? Vacant House? Dead guy with knife in chest?

Anyway, it turns out that the groom had failed to show up for his wedding. In fact, he hasn’t shown up anywhere for the last few months. Mark Lefevre, the financially strapped missing groom, was engaged to the incredibly wealthy Madeline Post. Mark is made out to be somewhat of an a**hole and what fascinated me, and actually made the novel worth the read, was how the couple was attracted to each other in the first place.

The main plot is interwoven with a couple of subplots including meth dealers and a missing fish. Kramer does throw out a number of red herrings (no pun intended), but they’re not very strong and anyone who reads mysteries on a regular basis will not have a hard time figuring this one out. The ending of the book could have been wonderful had it been subtler. Instead it reads more like a Hollywood blockbuster movie with a quick scene thrown in to tie up the loose ends.

On the plus side, Kramer is a solid writer. She gives her characters real depth that the reader can sympathize with, and will care about. Her experience in the TV news field is obvious as she takes you behind the scenes at Channel 3 News with what feels like a very accurate portrayal. Also, the book takes place in and around Minneapolis. Anyone familiar with the area will enjoy all the landmarks she points out.

Missing Mark is the sequel to Stalking Susan. Although, I don’t think one needs to have read Stalking Susan (I haven’t) to get the full impact of Missing Mark, Kramer does make a number of references to her debut novel which made me think that I’ll probably go back and read that one. It sounds like a better mystery.