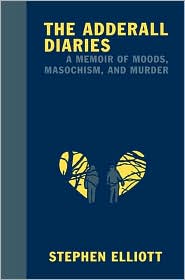 The only way The Adderall Diaries: A Memoir of Moods, Masochism, and Murder could be more of a diary would be if it had a Yorkie on the cover and a glitter pen attached with a little belt-like loop.

The book covers just more than a year in the life of Stephen Elliott, who is combating writer’s block with Adderall — which has him pacing his San Francisco apartment — yet he continues to struggle to make words, coming off the success of his novel Happy Baby, his best, according to footnotes on his “Also By Stephen Elliott” page.

A friend gives him a tip: Computer programmer Hans Reiser — a name that means something among people who read about the people who make code — is accused of murdering his estranged wife Nina, a woman he shopped for overseas in hopes that the cultural differences would mask his social awkwardness. There is no body, just her mini van filled with rotten groceries and a busted melon. Meanwhile, Reiser’s friend Sean Sturgeon, who had briefly been Nina’s lovah, has confessed to murdering eight and a half people — but not Nina. Just some of the whack-job pedophiles who diddled him when he was growing up and so the world is a better place. Elliott connects with Sturgeon, whom he kind of knows from the neighborhood’s underground S&M scene. They have girlfriends in common, and oddly enough Elliott was part of a bondage photo shoot in Sturgeon’s apartment when he wasn’t home.

Elliott sets out to write In Cold Blood 2.0 working with Sturgeon — who is not a reliable narrator of his own life story. While Elliott waits for Sturgeon to make reappearances and divulge more information about these eight and a half murders (he isn’t sure he actually killed one of them) he is writing about his own life: Words carved into his rib cage by dominant women, panties stuffed in his mouth, being the inside of a spoony cuddle with a woman who has just whapped him around a room with a paddle like he was the ball in a cricket match. And he reflects on a life less ordinary: His mom died when he was young and his father was bipolar. Elliott was homeless in his early teens, and once his father moved without giving him the address. He was a ward of the state. He was on drugs. And he liked to get the shit kicked out of him by women.

These stories meld together as the trial begins. A friend tells him that he is associating too much with the parties who are involved. Hans as his own father, Nina as his own mother. He tick-tocks the plot in a way that one minute he is writing about the case, and sandwiched into the next paragraph is a story about his own past. It’s also very immediate and includes Paris Hilton’s release from jail, juxtaposed with greater world news. It’s also very retrospective, and deconstructs Elizabeth Wurtzle.

Within all of this are Elliott’s take on writing. How you can’t write anything without pieces of yourself creeping into the story. How there are no facts, just perspectives. This idea reminded me a bit of The Night of the Gun, by David Carr.

I absolutely loved this book, which has already taken on some sort of cult status with the kiddies, as Elliott’s lending library has made it possible for everyone in the world to read it before it is actually released. It has a few “woe-is-me” moments that get a little gaggy, but it also has all my favorite ingredients: True crime and addiction memoir wrapped in one — and the S&M provides the opportunity to play armchair psychiatrist on the writer. It is a brave collection of words, although I’m not sure it counts as brave when the writer doesn’t seem to struggle with ripping off any pretenses and laying naked on the table.