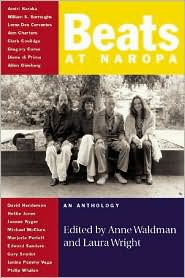 Anthologies are interesting. They have as great a possibility of ending up looking like the inside of the junk drawer as they do a brilliant filing system. This being said, half the merit of an anthology is its organization and flow and the other part is how it fulfills the subject or goal idea. In the case of Beats at Naropa there should probably be a mention of Kerouac and Ginsburg; this anthology does that and more. Educational and whimsical, the book is filled with transcribed audio discussions and excerpts of personal essays, prose, and poetry. Even the cover is perfect with its black and white photo and primary blocks of red, blue, and yellow. No psychedelic swirls or hypnotic trances here: just straight-up Beat.

'We [Ginsberg, Burroughs, and Kerouac] were just three interested characters, in the interesting big city of New York, around campuses, libraries, cafeterias?.So here comes Snyder with a bottle of wine?.and here comes Whalen, and here comes what's his name, Rexroth, and everybody,?and we had the poetry renaissance of San Francisco?'” -pg 50

The inside pages catch the thoughts behind the process of the great and lesser-known Beat authors. In some ways it is a romantic flash-back into the Beat Era, but for the most part it is authors writing their own history, and sounding back on their work and the public's theories of what their work was about. It also has some great tips on becoming inspired, writing poems or prose, and handling the fame (or non-fame) that comes with it. Be ready; this anthology will inspire you to write poetry. If you are already a poet, it will make sure you take it to a deeper level.

So I'd let Kerouac come home with me the first night I met him. Quite the little existentialist, as my Barnard professor once wrote. Or perhaps my state of mind approached the original definition of Beat.” -pg 60

The most provocative sections deal with the two greats: Ginsberg and Kerouac. To many, the names are interchangeable, but in reality they were two starkly different souls who had the same talent for inspiring the nation with words. Kerouac had difficulty dealing with his fame and critics. He became a recluse, a drunk, and alienated some of his followers. Ginsberg was more at ease with the press and very social. He also had a certain spirituality not found in Kerouac. Both were terribly iconic, but incredibly different.

Ginsburg won't stop tossing lions to the martyrs ?
The Church is becoming alarmed by the number of people defecting to God ?
The holy stepfather cautioned the faithful to emulate none of the saints who hide behind the Fifth Commandment when persecuted.
There is also a move to cut off Ginsberg's supply of lions.” -pg 120

If you want to be entertained go straight to the interview with William Burroughs by John Oughton and Anne Waldman. It is hilarious: filled discussion on longevity pills, outer space, atomic bombs, greed, and the most interesting tirade on written word verses spoken word. Burroughs pops up in a couple other essays and never having read his work, I feel I ought to.

Waldman: These are the first words, you're saying, are hallucinated voices.
Burroughs: Speaking about language, see, animals talk, they don't write. In spoken words is implicit the concept of written words. Animals don't have that concept.” -pg 158

The great thing about this anthology is that you will find new favorites. Along with Burroughs, I found Diane di Prima's essay “By Any Means Necessary” one of the best in the book. Its focus is getting the written word out to the world. She says that when you finish writing something, it no longer belongs to you. It has a life of its own and you need to launch it.

The Beat poets did exactly that. They flung their words at audiences, in a time where words were left on a bookshelf or read in hushed tones. Beats at Naropa is an incredible anthology that proves truly great poetry can never be “shushed.”