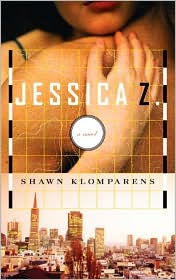 I started reading Jessica Z by Shawn Klomparens while getting gas. I was three pages in when the pump clicked to indicate a full tank, and I jumped like a foot. It was like I’d gone into some sort of Klomparens koma or something. “This is a good sign,” I thought. “I’m not going to be able to put this book down.”

That much is true. I read Klomparens’ first novel over the course of a single rainy Saturday. The title-character is an upper-20s copywriter living in post 9/11 California, but this post-9/11 country is a place where suicide bombers are the regular news d’jour. Things are exploding with such frequency, that when Jessica hears an explosion she knows she will come home to an answering machine blinking with frantic “Are you okay” messages — some from people she has forgotten she knows.

She has a complicated relationship with her upstairs neighbor, Patrick. A stumble home drunk and mess around situation that, early in the story, she has put the kibosh on: No more bumbly fumbly, or things that might lead to it. Patrick reminds her of this when she tries to give him a back rub over coffee and toast. Their relationship is so undefined that it is hard to tell who wants who and who is calling the shots. Patrick blames Jessica; Jessica seems interested in breaking her own rules and taking this thing horizontal again.

When Patrick seems to be falling into a relationship with anony-blogger Gretchen, Jessica wages a counterattack and begins dating Josh, an intense artist specializing in phallic symbols. Josh is totally whack: domineering (no cell phones in his apartment!) and political (every time something new explodes, Josh’s sympathies lean toward the detonator). In the meantime, he has begun a new project that involves scanning the entirety of Jessica’s body and turning her into a topographical map. The relationship is beginning to make her uneasy, Patrick is still on her mind.

The major event of the book happens well-past the line in the sand separating a book review from a big fat spoiler. Unfortunately, in order to say what I think about this book, I have to kinda-sorta go there: This book is a total tease, and Klomparens pussed out on the ending it should have had. Instead of a “Zoiks!” it’s more like listening to a friend tell a lengthy and involved story where nothing actually happens but it COULD have happened and wouldn’t that have been crazy?!

So, did it suck me in? Yes. Did it leave me satisfied? Nope. I feel like I got taken. This book is like sending in 12 Captain Crunch proofs of purchase, giddily checking the mailbox every day, and six weeks later, receiving a piece of plastic nothing.