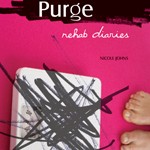 Nicole Johns received an MFA from the University of Minnesota and a BA in English from Penn State University-Erie. Her eating disorder developed in high school and worsened in college.

The summer after starting the MFA program, Nicole went into treatment for her eating disorder. Purge is about the time she spent at an eating disorder facility after nine years of restricting and purging. Her diagnosis was Eating Disorder Not Otherwise Specified, a disorder that borrows pieces from both anorexia and bulimia.

What book(s) are you currently reading?
I’m currently reading Killing Dragons: The Conquest of the Alps by Fergus Fleming. It chronicles the history of mountain climbing in the Alps. It’s fascinating. I love reading books about subjects I know very little about.

If your favorite author came to Minnesota, who would it be and what bar would you take him/her to?
This question is really hard. I have lots of favorite authors. At different times in my life, I’ve had different favorite authors and books. In high school it was Kate Chopin. In college it was Willa Cather. In grad school it was Jeffrey Eugenides. Right now I’m not feeling particularly loyal to one author, and I’m reading whatever I come across. I just finished an anthology of post-apocalyptic fiction and before that I had been reading Blonde by Joyce Carol Oates. If Kate Chopin or Willa Cather came back to life, I’d take them to the Blue Moon coffee shop over on East Lake Street in Minneapolis. I think they would dig that. I’d take Jeffrey Eugenides to the Groveland Tap in St. Paul. I take everyone, author or not, to the Muddy Pig or the Happy Gnome in St. Paul if they like beer.

What was your first favorite book?
The Train to Timbuctoo by Margaret Wise Brown. I used to make my mom read this to me over and over again when I was about three or so. I loved the rhyming and the words “Timbuctoo” and “Kalamazoo.” It was my first childhood obsession. After The Train to Timbuctoo came my obsession with the game Candyland, then later in childhood I became obsessed with the Laura Ingalls Wilder series (which is cool because I now live near some of the places she wrote about).

Let’s say Fahrenheit 451 comes to life, which book would you become in order to save it from annihilation?
The Awakening by Kate Chopin. That book was the first work of adult literature I fell in love with. It pushed me to examine gender roles in society and awakened my feminist sentiments. It was this book (and two amazing high school English and History teachers) that sparked my interest in literature, writing and feminism. I believe The Awakening influenced other young women as well, and it would be a travesty if it were erased from history or annihilated by book burners.

What is one book you haven’t read but want to read before you die?
Crime and Punishment. And a million other books. My amazon wishlist is 24 pages long and 95% of that is books. That should tell you something.