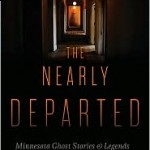 Who among us hasn’t partaken in the goodness of Beth Scott & Michael Norman’s Haunted Heartland? Haunted Wisconsin? It seems to me everyone I know has at least thumbed through one of those books, can recall one of the stories, or has had one told to them. They’re creepy and delicious. And if you like your creepy with a local flavor, you’ll be happy to know that Michael Norman has just released The Nearly Departed: Minnesota Ghost Stories and Legends. Yay! Bring on the spookiness.
What book(s) are you currently reading?
The Guernsey Literary and Potato Peel Pie Society; John Sandford’s Wicked Prey. I’m also re-acquainting myself with Mark Twain’s life and works for a library program about Hannibal, MO I’m doing in September.

Have you ever had a crush on a fictional character? Who?
No, though I wouldn’t mind spending an afternoon with Isabel Dalhousie. . .

If your favorite author came to Minnesota, who would it be and what bar would you take him/her to?
Living or dead? (Would you not expect this question from me?)

Living: Alexander McCall Smith; any bar with a good view of a busy Twin Cities street. He has such keen insights into the human condition that I’d like to think he could weave marvelously droll tales about the people and activity he’d see flow past the windows.

Dead: Shakespeare. Brit’s Pub and then get him drunk enough to reveal whether he really did write all those plays and sonnets. . .

What was your first favorite book?
All the books by adventurer/explorer Richard Halliburton. Mika Waltari’s The Egyptian. (For a few months, I even changed the spelling of my first name to match his.) Rafael Sabatini’s Scaramouche
(sorry, hard to pick just one).

Let’s say Fahrenheit 451 comes to life, which book would you become in order to save it from annihilation?
Can’t decide. Either The Adventures of Huckleberry Finn or a logophiliac’s playground, the 2,814 page Funk and Wagnalls New Standard Dictionary of the English Language (1944 edition).

What is one book you haven’t read but want to read before you die?
All of the Bible.