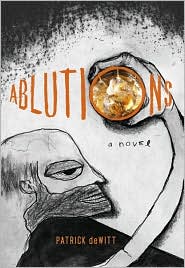 There are a few things that make me leery when reading a debut novel: 1) When one of the blurbs is by someone who is listed in the acknowledgments (Well that was nice of your friend/writing mentor/college roommate Dennis Cooper to say he loves this book very much); 2) When the book is, oh, say, about a bartender, and in the author’s short bio on the back flap it says, for instance ” … Oregon, where he currently resides … blah blah … has worked as … a bartender.” That makes me say, “Then write a story about a piano teacher, you fool.”

Patrick DeWitt probably could have found a stranger to say nice things about his novel Ablutions: Notes for a Novel,? an alternative-format story told in vignette sized character sketches, and starring the dozen-or-so regulars this guy encounters while working at a bar in Hollywood. And by “this guy” I mean “You.” Ablutions is written in second person. The nerve.

There is a cocaine-addled manager, an alcoholic former child actor, two school teachers, an artist, and a dealer. For awhile there is a wife, but never at the bar. Our hero, or should I say “You,” is an Irish Whiskey kinda guy, matching customers shot for shot, then driving home in a seemingly magic car that attracts no attention from police. (This is actually one of my favorite details).

Time passes, more drinks are had, more after-bars, then the kind of storage room gropings that proper lighting cannot justify. You are going downhill fast, and regularly take more than the recommended daily allowance of aspirin.

This is a nice enough read. Interesting little stories, that shed light on you as you become completely derailed. Characters examined on only that very surface level with which one regular gets to know another regular in any bar setting.

Then there is a random road trip thrown into the latter half of the story for no real reason, and where once you were showing signs of fatal alcoholism, you manage to sort of taper your consumption when a new business opportunity presents itself. I struggled to not call bullshit.

And of course, the final part of the story is where the chaos erupts, or as I like to say, where in the TV-movie the clarinets would go apeshit to represent complete mayhem.

Sometimes I hate that good writers don’t know how to end books without resorting to that nonsense. I forgave DeWitt quite a few things because he writes well and tells good stories, but this explosion-style ending is too easy. He’s like a Russian gymnast that does a great floor routine, and ends it with a somersault. (Not a spoiler, I assure? you).

Also: Let it be said that I am the first reviewer to not mention Bukowski, which people like to do when they see the words “Alcoholic” and “Writer” set in Hollywood.