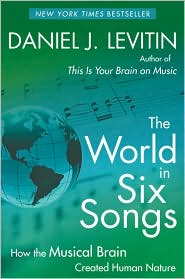 Daniel J. Levitin's The World in Six Songs reminds me of a very important lesson I learned a long time ago, which can be summed up like this: Shut up and enjoy it. Consider a couple of examples.

The World in Six Songs is much like this, only with music. Levitin, no doubt a brilliant scholar, took on a monumental task of explaining why a person feels and acts the way they do when experiencing music. Exploring the realms of friendship, joy, comfort, knowledge, religion, and love, Levitin used his experience as an expert in music cognition and perception to show, as Bobby McFerrin said on the back cover, why a song can make a person cry in a matter of seconds.

However, I am not sure I want to know the gory details of why this happens. I am in the camp that really likes to enjoy art without the play-by-play analysis. Consider this example.

In the eighties and nineties, Michael Stipe with R.E.M. and Morrissey (first with the Smiths and then as a solo artist) reached millions of listeners with their songs of depression, alienation, and detachment. (128)

Despite my misgivings about lumping Michael Stipe together with Morrissey (R.E.M. cannot even begin to express these sorts of feelings quite like Morrissey), Levitin stated the obvious here. In my days of teen angst, I turned to Morrissey, Joy Division, Depeche Mode, and The Cure because they somehow made me feel better.

Here is Levitin's explanation why Morrissey was able to sing me off the cliff of teenage abyss.

When we are sad, many of us turn to sad music. Why would that be? On the surface of things, you might expect that sad people would be uplifted by happy music. But this is not what research shows. Prolactin, a tranquilizing hormone, is released when we're sad. Sorrow does have a psychological purpose and it may be an adaptive response, which is to help us conserve energy and reorient our priorities for the future after a traumatic event. Prolactin is released after orgasm, after birth, and during lactation in females. A chemical analysis of tears reveals that prolactin is not always present in tears-it is not released in tears of lubrication of the eye, or when the eye is irritated, or in tears of joy; it is only released in tears of sorrow. David Huron suggests that sad music allows us to “trick” our brain into releasing prolactin in response to the safe or imaginary sorrow induced by the music, and the prolactin then turns around our mood. (132-133).

Yes, his explanation is mildly interesting. However, these explanations became too much when they are constantly coming at you page after page. While I am not going to question Levitin's academic prowess, I do question a person's reason for trying to examine and explain everything possible about a given topic, especially something as massive as the human response to music. I become suspicious when a person undertakes such an endeavor in just under 300 pages.