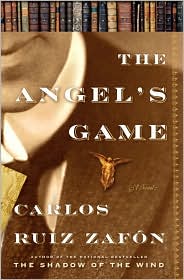 The Angel’s Game by Carlos Ruiz Zafon is the kind of book where you can hear men’s shoes scuffing across a wood floor in an empty mansion filled with candles and secret passageways. Where some people take long lunches filled with wine and cheese, and when they settle in with a good book, the spine creaks.

David Martin’s mom abandoned him, and his father is the kind of asshole who sees David reading a copy of Great Expectations and goes fist-crazy on him. After his father dies a mafia-style death in the streets of Barcelona, David is given the opportunity to write a serialized set of short stories for the newspaper. He develops a following, and later a book deal for similar-genre novels under an assumed name.

David moves into this fantastic old house that he has admired his whole life. It’s a gloomy place, filled with dust and and a tower overlooking the dregs of the city;? secret passageways and the wardrobes of the long-abandoned house’s former occupants.

David writes until his fingers bleed and his grooming habits become less habitual. His words belong to two stingy publishers straight out of a Neil Gaiman novel, and David becomes fatally ill. Then he meets exactly the kind of man who always walks into this sort of story: A mysterious and wealthy guy, an all-knowing chess master.

Andreas Corelli offers David zillions of dollars and the restoration of his health in exchange for a commissioned piece of writing. David is out of options, and signs on to the project. In the meantime, there is a ton of stuff going on: Something linking David to the previous homeowner, an unflappable student/assistant, a meaningful friendship with a bookstore owner, and of course a woman who ends up married to his best friend.

It is so seamlessly sensory, that I was confused. Is this super good? Is this hokey, a glorified ghost story for children? Most importantly: Is there fog in my hair? On the other hand, parts are so predictable. I knew that hand dangling casually over the arm of the chair would be attached to a dead person.

And it’s funny. Especially the banter between David and his assistant Isabel. It gets a little long, the plot winds a lot, and there is duh-da-duh intrigue, but the story feels like the reason you first opened a book. Not super high-tech, but entertaining.