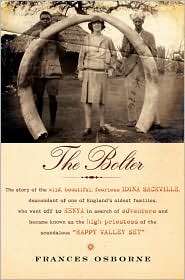 Frances Osborne is fairly young when her mother tells her that Idina Sackville, Osborne’s great-grandmother, is not someone to be admired. The infamous Idina didn’t follow conventional rules, and Idina’s mother before that was a bit of a scuttle-butter. Idina’s crime: Divorcing her husband, leaving behind two young sons, and splitting to Kenya with another man. The Bolter is Idina’s story — five husbands, hundreds of lovers, wicked parties, drinks, drugs, notorious friends, and scandal that goes from London to Kenya and back — as traced by Osborne.

Idina’s father left her mother, but there was enough money to keep the young girl who was not conventionally attractive dressed in clothes that seemed to be made to fit her body. And when she went places, newspapers wrote about it, and people gossiped about it. She was the template of a reality television star as chronicled by Gawker. Idina fell madly in love with husband numero uno: a hot and wealthy highly sought gent, Euan Wallace.

Rule No. 1: Men are allowed to philander all over the place. Common courtesy is to sleep with married women, so that if said woman gets pregnant, it is without the drama of a single woman getting pregnant.

Euan, with an eye that wandered more than Meriwhether Lewis, fell into shady relations with a crowd of the young, single women Idina’s little sister partied with. Particularly a woman named Barbie, whom he would eventually marry. When Idina was laid up with an illness, and Euan was on leave from the war, there were plenty of opportunities for him to leave Idina’s bedside for tennis matches and parties with the girls.

As the war ended, Idina struck a controversial stance: Get or get got. She would have to leave Euan before he left her. And this meant, per their written agreement, that she left behind her sons. For this she earned a place in literary history. Idina is said to be the template for the bolter in Nancy Mitford’s The Pursuit of Love, and the character Iris Storm, in The Green Hat is based upon her.

Idina marries four more times in a biography that is sometimes fascinating, sometimes like reading a time line. (Common misconception about English majors: We all enjoy reading history). Sometimes the names and alliances are hard to follow, and it is frequently repetitious. I’d like a dime for every time it is noted that so-and-so stayed up late listening to the gramophone and dancing. And society rules are repeated: Divorce bad. Affairs with married women, okay. Twice divorced, terrible. Deserted by husband, bad. Shoot someone, moderately bad.

But stories about sassy women in the early 1900s are, by nature, a fun read. Dare I say even a beach read for women who don’t like lipstick fonts? I’m not convinced that Osborne finished writing this book believing her mother, that Idina was not to be admired, but they can sort that out over the holidays.