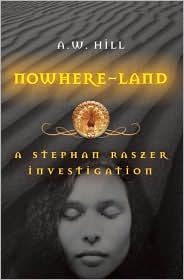 Saving souls just isn't what it used to be for P.I. Stephan Raszer. Hired to find a young girl missing from the Jehovah's Witness chosen flock, Raszer may have stumbled into a case more deadly and deceitful than he imagined. The Devil, greedy to gain more souls, has gone high-tech to lure disillusioned youth and misfit, college gamers to a false palace filled with opium and stolen virgins.

By any standard, it was an ugly case, maybe the ugliest he'd taken since the turn of the millennium. Given the shakiness of his psyche, did he really need this?” -pg 60

Gritty and transcendent, author A.W. Hill takes the reader from the hills of Hollywood to the mountain-lands of Turkey, Iran, and Iraq on a search for God. Nowhere-Land is a place filled with vultures, land-mines, poppy fields, heaven, and hell. Luckily, Raszer has friends and allies that he can count on, including the mysterious Philby Greenstreet, rebellious Francesca, spiritual Shams, and trusty assistant-in-soul-searching Monica Lord.

'If you were the Devil,” said Greenstreet, “Wouldn't you build your hot dog stand near the entrance to paradise?' ” -pg 277

Raszer becomes a player in the game because it's his job, but also because he is bankrupt and almost as lost as the other unfortunate role-players. As he seeks a new reality and a way to save the girl, his home life is terrorized and he is being stalked by an evil entity with wintergreen breath. Even his supernatural third pupil is having trouble tuning into the truth. The world is turned upside down and he may never be the same.

'I was moving forward, but it felt for a second like I was going backward.' He cocked an eyebrow in Francesca's direction. 'Is this what you meant by a shift in perspective?' -pg 389

Nowhere-Land is an entrancing read, but there are sections that get cloudy even to the most perceptive reader. Hill, at times, leaves the reader to ponder over a web of historical religious intricacies. Ultimately, while the reader is processing all the information, gaps in plot occur. An average reader could end up skimming the most interesting sections. This might be the author's way to sustain the feeling of being lost, but it just doesn't work.

What does work is the ending. It isn't happy, but it isn't sad?it's real. It also is the perfect cliff-hanger to another novel. Simply put, Nowhere-Land is a guy's book any chick would dig. Main character, private investigator Stephan Raszer, has the classic James Bond, loner style women hate to love, but still love, especially in a fictional character. Hill's narrative has themes of religious extremism, and government conspiracy theories, but the plot is more highly developed than your usual airport-rack read. Nowhere-Land is similar to Dan Brown's DaVinci Code, but ride is wilder and more sensual. From the eerie cover to the final chapter this book has enough suspense and chills to cool even the hottest summer day.