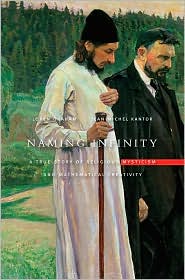 A few months ago, I had a dream that led me to start thinking about the religious, spiritual, and philosophical significance regarding the mathematical concept of infinity. Combining this with my never-ending interest in Russian and Soviet history and culture, Naming Infinity would seem like a perfect book for me. Just released in March, Loren Graham and Jean-Michel Kantor's book was supposed to tell a true story of religious mysticism and mathematical creativity.

The authors of this book wanted to convey the idea “that a religious heresy [Name Worshipping] was instrumental in helping the birth of a new field of modern mathematics [set theory]” (5). What the book actually contained was a thorough history of early twentieth-century Russian mathematics through three people-Dimitri Egorov, Pavel Florensky, & Nikolai Luzin-who happened to be religious and were involved in the Name Worshiping religious ideology. Readers of J.D. Salinger's Franny and Zooey were given a glimpse of what Name Worshipping is about through Franny's involvement with the Jesus Prayer and the Russian mystical classic The Way of a Pilgrim (13). There was very little examination of Name Worshipping and analysis of the religious beliefs and mystical experiences of these three mathematicians or of any mathematicians in general in this book. Religion, spirituality, and mysticism were treated as a secondary trait of these scholars, reduced to a role of classification and identification, and not fully investigated by the authors.

Naming Infinity is really a history book that touches briefly on the math philosophies of these three Russians and the differences between Russian, French, and German philosophies of that time. These philosophies are interesting and helped me think and learn about some of the history behind the concept of infinity. However, I was looking specifically for the mystical connection that was not there. The history drowned this out and only left us with this short attempt at a connection between the math and mysticism.

It is not necessary to resolve the ultimate problems in the philosophy of mathematics in order to see that Name Worshipping-a religious viewpoint regarded as heresy by the Russian Orthodox Church and condemned by the Communist Party as a reactionary cult-influenced the emergence of a new movement in modern mathematics. In contrast to the French leaders in set theory, the Russians were much bolder in embracing such concepts and non-denumerable transfinite numbers. While the French were constrained by their rationalism, the Russians were energized by their mystical faith. Just as the Russian Name Worshippers could “name God,” they could also “name infinities,” and they saw a strong analogy in the ways in which both operations were accomplished. A comparison of the predominant French and Russian attitudes toward set theory illustrates an interesting aspect of science: if science becomes too cut-and-dried, too rationalistic, this can slow down its adherents, impeding imaginative leaps. (189-190)