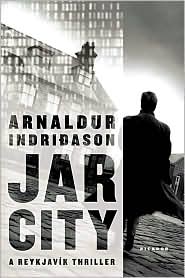 I enjoy reading mysteries that take place in other parts of the world. I like being transported to lands where I know absolutely nothing about the people and their customs. When a friend recommended Jar City (A Reykjavik thriller), by Arnaldur Indridason, I couldn’t wait to dive in. Before the story even starts there’s a note explaining why Icelanders always address each other using first names. That’s just what I’m talking about – who woulda thunk? (There’s also a couple of maps, and those usually scare me.)

I always appreciate a protagonist that has some flaws, and Detective Inspector Erlendur Sveinsson has more than his share. He’s long divorced (Indridason only brushes upon it, but the reader gets the message loud and clear that it was a nasty one), he smokes, is overweight, eats mostly take-out, and has stomach pains (I like this guy), and his daughter is a junkie. Erlendur is called to investigate the death of an old man, Holberg, in his home. The side of the victim’s skull had been crushed by what is most probably a heavy ashtray that was left at the scene.

Isn’t this your typical Icelandic murder?” asked Detective Sigurdur Oli . . . “Squalid, pointless and committed without any attempt to hide it, change the clues or conceal the evidence.”
“Yes,” said Erlendur. “A pathetic Icelanic murder.”
p. 7

It turns out to be anything but. Holberg was not just some kindly old man, but back in his day he was quite the thug and sadistic rapist. Thus, the adventure begins, or so I had hoped. The first half of the book is by far best, digging up the man’s past, finding victim’s and trying to interview them. There are some very heavy and touching scenes where the police are trying to interview rape victims who had buried the past and are now forced to relive it. And then there’s Erlendur’s relationship with his daughter (I actually found their relationship more fascinating than the murder investigation). There’s a disgusting little scene when she comes to his home asking for money. When he says no she begs, pleads, then offers to ‘do things’ in which Indridason effectively tells the reader how low she’s sunk.

The second half of the book plods its way through (although hardly in a thrilling manner like the cover suggests). Erlendur makes a couple of leaps that left his team, and me, wondering how did he come up with that? I actually was more looking forward to the chapters containing interaction between Erlendur and his daughter. But my biggest problem with the book were the names of the characters Indridason came up with. Here’s a partial list: Erlendur, Elin, Elinborg, Ellidi, Einer, Eva Lind, Albert, Audur, Katrin, Kolbrun, Holberg, Hilmar. Like many people, I do the vast majority of my reading while on breaks which means I don’t spend a lot of time at one sitting. I constantly found myself confusing one name with another and having to go back and figure out who was who (or is that whom?).

Indridason catches the mood of the Icelandic people, and it was fun reading about how different their lifestyles are, and at the same time how similar. As a thriller – hardly, but as a solid murder mystery – I’ll give it that.