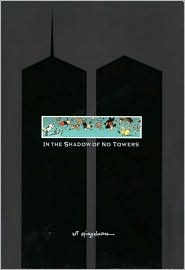 A few months ago my friend Wolfdogg loaned me a couple of post-9-11 anthologies that contained a bunch of short graphic (as in pictures and not extremely, grossly detailed) stories about the artist’s reactions to 9-11. I dove into one of the books and about half-way through put it down. I couldn’t continue.

It’s not that it was too soon, it was that it was entirely too late. The comics filled with kumbaya, we’re all in this together, united we stand, blah, blah, blah just rang false nine years later. Knowing years after 9-11 the fallout of that event — our country more divided than ever, thousands of lives lost fighting wars for reasons that were false and unclear, economic ruin — the peace, love, and understanding tone of those anthologies just rang false and, ultimately, naive.

So when Wolfdogg pressed the giant copy of In the Shadow of No Towers by Art Spiegelman into my hands, I was skeptical.

I had just come off a high of reading Maus, and wasn’t sure I wanted to sully that memory with some 9-11 bullshit.

Lucky for me, it wasn’t bullshit at all. Spiegelman tells his personal story of 9-11, a day that found his daughter in school a few blocks from the World Trade Center, with an emotional nakedness that was, at times, hard to read.

Spiegelman admits he lost his shit. He goes back to the day it happened and then chronicles how he got through that day, and subsequently went a little nuts. It’s fascinating. What makes it even more fascinating is that Spiegelman tells his story using historic characters from the early days of comic strips — the Yellow Kid, the Katzenjammer Kids, and, if you’ve read Maus, even some of his own characters.

This is a big book physically, it’s huge — like a foot tall. Each panel fills two pages, you have to turn the book sideways (portrait as opposed to landscape) to read it. The pages are drawn like broadsheet newspaper comics from the golden age of comic strips . It’s also filled with big emotions. I loved Spiegelman’s anger. Like in this panel: 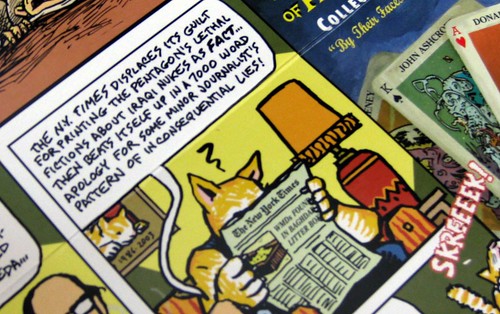 It’s a brave book. Published in 2004, I can’t quite remember if it was popular or accepted yet to be angry with the way our country handled the days after 9-11. It’s a reassuring book to read for those of use who were not filled with jingoistic, chest-thumping patriotism following the tragedy.

Besides being a story about losing his shit, In the Shadow of No Towers is also gives a short history about the early days of comic strips (back when they weren’t strips, but actual pages), which is a fun and fascinating read.