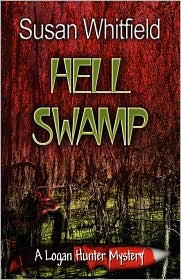 Two things attracted me to Susan Whitfield’s Hell Swamp from the get-go. First of all – the title. Hell Swamp just shouts horror! Second – the cover art. Looking at the cover, well, it looks like a swamp in Hell. Glancing at the back cover, I was mildly disappointed that this wasn’t a horror novel (horror in the classic sense), but a murder mystery (“not that there’s anything wrong with that” – Seinfeld cast). I was kind of expecting a Satan’s spawn rises out of the Louisiana bayou sort of thing. Wrong on all counts.

Agent Logan Hunter is sent to Ivanhoe, North Carolina, to investigate the murder of Clara Banoak. Ms. Banoak is an animal rights activist in a small community of hunters. Ms. Banoak is also found hanging from her ceiling, having been gutted like a deer. (Here my disappointment was quickly laid to rest.) After a tension filled opening that grabs the reader by the throat, the novel slows considerably as Agent Hunter meets and interviews the colorful residents of Ivanhoe; Hawk Daw, Cyrano Blood, Nita Quicki, to name a few. Every interview is cordial and friendly, and every suspect has pretty much the same motive – they all hate Clara Banoak. It seems that she took her activism a bit to the extreme. But the novel quickly picks up again when Logan is getting a little too close and the first attempt is made on her life. From there it’s a good old fashioned roller coaster ride to the end.

One of the refreshing things in reading Hell Swamp is that Whitfield has done her homework as far as police procedure. It seems that I’ve read too many mysteries in the past where it feels like the author got all their procedural info by watching an episode of “Law and Order.” I’m no expert, but if Susan Whitfield isn’t following procedure, at least it’s more than enough to suspend my disbelief. She also sprinkles in very humorous and colorful descriptions:

The sun disappeared and one stray cloud’s bladder emptied on me.” p.48
“He soon started the conversation, rubbing his nose, which resembled a bull’s hairy gonad.” p.60

You get the idea. There’s not enough to drown the flavor of her general prose, but enough for the occasional chuckle in tense situations.

Overall, the novel is fast paced and a quick read (just under 200 pages). There are enough subplots going on to keep the main plot fresh and interesting. A couple of “oh, really” spots (i.e. Logan was told about a satanic sect by the swamp. She later sees a truck driving toward the swamp with people in the back all wearing black jackets with hoods and she doesn’t make the connection.), but after thinking about it, I guess that’s just one of the things that makes her human. After reading Hell’s Swamp any thoughts I’ve ever had about living in a small town – just sank.