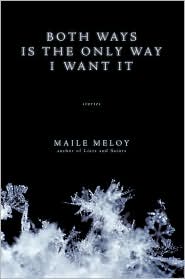 Anyone who has ever read Flannery O’Connor’s short story “A Good Man is Hard to Find” a second (or more) time will remember that chest-tightening tension that happens when you read about the grandmother and her family happening upon the strangers on a deserted southern road.

Maile Meloy conjures up that same kind of tension in “O Tannenbaum” the final story of her new short story collection Both Ways is the Only Way I Want it.

Holy shit is that some kind of wonderful. It doesn’t happen often, but when you have an actual physical reaction while reading a story, it’s the best thing in the world. As I read about a married couple with a young daughter, picking up a pair of hitchhikers on a snowy road in Montana, my entire body clenched. The tension was unbelievable, as I learned the hitchhikers’ names were Bonnie and Clyde, my breath started to come out in short little pants.

The story, most of which takes place in a claustrophobic, tension-filled car is so good that once you finish it, and realize there’s no more to the collection, you’re super disappointed.

The geniusly titled Both Ways is the Only Way I Want it (many of the stories deal with characters who want two diametrically opposed things at the same time) is a solid, solid collection. There isn’t a dud in the bunch.

It’s cliche to compare a short story writer to Raymond Carver, but somehow I cannot escape the cliche. I can’t avoid it, and I’ve already called up O’Connor, so what do I have to lose? The Carversqueness comes from Meloy’s sparse prose and her ability to tell stories about ordinary people in a way that feels real, genuine. It’s a high compliment, really, that Meloy has earned.

One story, “Two-Step,” seems to be about nothing more than two women talking, one pregnant and suspecting her husband of cheating, the other a sympathetic friend, but there is so much more going on there than meets the eye. Then there’s “Spy vs. Spy” about two forty-something brothers who are still engaged in a sibling-rivalry and who try to prove whose better by winning the number one spot in one of their daughter’s heart.

And, what might be my favorite (though it’s really hard to choose when all the stories are really good), “The Girlfriend” which finds a man quizzing a goth teen in a hotel room, the girlfriend of the man who killed his daughter. The pain and regret in that story is palpable and makes you want to shake your head no and beg the main character to stop.

I would like to say that it’s been a long time since I’ve read a collection this solid, only so I could heap more praise upon this book. But that’s a lie, because a month or so ago I read Twin Study by Stacey Richter and that too was some kind of amazing in a wholly different way. I’ll just say this, go read Both Ways is the Only Way I Want it, much like the Richter collection, it will make you understand the potential and beauty that lies within the short story format.