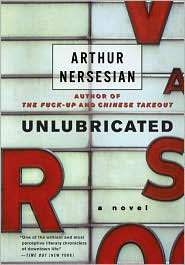 It’s 2001 and Hannah is a paycheck-to-paycheck actress, disrobing and gyrating, pressing the flesh at parties, in a relationship with her college theater professor Christy, and looking for a break. She’s at a party she shouldn’t be at when she overhears a former classmate, Bree, talking on his cell phone: He has unearthed a copy of a lost play written by the infamous and recently deceased Lilly Bull, a woman who’s life included a prostitution phase and that time she killed a downtown street musician. Her play “Lubricated,” is mentioned briefly in her memoir, which is all the rage after she dies.

Hannah propositions her old friend: She’d like to produce this play, and besides, Bree, an out-of-control addict owes her a favor.

There is a lot going in Arthur Nersesian’s novel Unlubricated. Bringing the play to fruition is painstaking: Getting the rights to it, finding a director, filling the roles, finding a cheap theater. . . Not to mention that Hannah has more sex scenes to shoot for the film she’s in, a boring dentist boyfriendish sort, unresolved feelings for Christy, sleazy theater types trying to get some action from her, temp jobs, eviction, a soiled relationship with her parents. Oh. And Hannah was blocks away from the World Trade Center on 9/11 and part of the mass of people trying to evacuate the area, which is inducing panic attacks in the months following. And there is a weird lump on her wrist that her acupuncturist is trying to fix by feeding her tea made from bug bits.

There are funny lines, and Hannah is a strange sort of disattached female voice: rarely introspective and quick to jump on a bad idea. There are chapters where this story feels like a 9/11 therapy session for Nersesian. A place for him to work out his feelings, using Hannah as his vehicle.

This novel is pretty inside baseball, painstakingly detailed accounts of bringing a show to life. It is actually too much information and too much chaos and by the time Hannah finds herself homeless, sleepless, and hopped up on an accidental No-Doz overdose, it felt like I’d run a marathon. I think I like Arthur Nersesian in theory more than in practice. His zingy one-liners get me every time. But his plots run me ragged. I’m giving him one more shot before I give up on him completely.