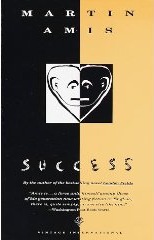 In one corner, we have Terry, a tragic character who is convinced that the universe has conspired to make sure no woman will ever sleep with him. His teeth are bad, he’s shedding hair, and he is in constant fear of losing his job in sales.

In the other corner is his foster brother Gregory, beautiful and bisexual, a gallery worker who flounces around London living the high life and wearing a cape.

Success, Martin Amis’ third novel, follows a year of their lives as roommates in a flat better suited for one. [Gregory must go through Terry’s bedroom to use the bathroom; Terry must go through Gregory’s room to get to the kitchen]. The story is told in alternate points of view, starting with Terry’s take on events, then followed with Gregory’s perception, in which sometimes only the barest of details are similar to what Terry has said.

Early in the story, which is very reader-aware, Terry confesses that he wants to make you hate Gregory, too. At the same time, Gregory’s biological sister [Terry’s foster sister] Ursala is becoming unhinged. She is a waify late-teen, who inspires all sorts of naughty ideas in both men.

This is the best use of voice I’ve seen in recent history. Blindly open this book to any page, read a paragraph and you will know for sure if it is Gregory or Terry’s side of the story. Gregory is high-falootin’ and dramatic; Terry is a hot pot of self loathing. And when changes begin to occur within the characters, there are subtle alterations in voice that still ring true. Terry develops a calmness midway through the book when he thinks he is finally about to seal the deal with Jan, a temp in his office. As Gregory’s life unravels, he becomes more honest. First dropping an untruth, then doubling back to clarify that what he has said was a lie.

I liked this, these long monologues with sudden surprisingly funny lines and unreliable — and pretty unlikeable — narrators.