A few years after ‘Migrating with Hope’ was published, Charm Tong’s women’s group, SWAN, published ‘License to Rape,’ which detailed sexual violations of Shan women by the Burmese military, including the 2001 rape of a girl whose arms and legs had been tied spread-eagled to a bed. Her parents came home from the rice fields and found her there, bloody and weeping. She was five years old.” p.28 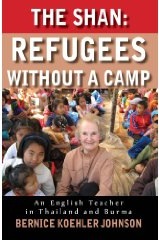 Did that get your attention? That’s the world Bernice Koehler Johnson travels to every year to teach English to Shan refugees who have escaped the persecution of the Burmese military and were able to cross the border into Thailand. In her book, The Shan: Refugees Without a Camp, Bernice chronicles her travels to the other side of the world telling heart rendering stories of her students and the sacrifices they went through just to go to school.

Bernice Johnson, an incredibly young seventy-two year old woman, grew up on a farm in Minnesota. She found a way to avoid Minnesota winters by teaching English in warm climate countries. In 2001 she was going to add Thailand to a list including Mexico, Spain, Indonesia, Ecuador, Turkey, to name a few. But something different happened in Thailand, and that something is eloquently told in a first person narration about the plight of the Shan people. It’s those stories that have brought her back every year (except one when she had to face a Minnesota winter because of knee surgery). Bernice talks about herself in a very honest way, not sugarcoating her biases and prejudice. She readily admits her errors in judgment making her human rather than portraying herself as a hero. But to the Shan children she truly is a hero. It’s the stories about individual children that is the focus of this book and gives it such a touching and personal feel.

What struck me throughout the book was not only the hardships that so many of the children faced, and the risks they were taking just to be able to attend school, but the hope and optimism so many of them shared.

What I had thought was a rascally smile reflected simple joy. He was happy to be among his peers, to have three meals a day without going into the streets to beg, to be learning English. Perhaps more than any of the other students, Sai Sam wanted the world to hear his story. If people only knew what was happening in Burma, he thought, they would help the Shan.” p.77

The second half of the book, at the request of her students, Bernice crosses the border into Burma. They want her to see, first hand, their homeland (and a homeland where they cannot return).

“n Burma, opposition political leaders and journalists who publish articles derogatory to the regime are imprisoned for years. That knowledge may be the reason most backpackers travel in twos, and here I am alone. And I have a secret to keep: The government would not look kindly upon my involvement with Shan refugees in Thailand. My stomach is fluttery with excitement, anticipation, and fear.” p 116

But it’s not all doom and gloom. In all the trepidation (at times she was followed by military personnel) there is humor.

At five-foot-one and one hundred ten pounds, I am a big person in Shan State. I try on a coat labeled XL. It is too small.” p 128

So why does she do it?

I did not come to Thailand to help others. It just happened. I fell in love with a group of young people, not only those in this room, but an entire classroom of men and women who reminded me of my sons and my granddaughters and who seemed to love me as they do.” p.228

Bernice ends the book with a where-are-they-now section. Some of her students are successful, some are not.

As stated in my title, The Shan: Refugees Without a Camp was hard to read, harder to put down, and nearly impossible for me to review without sounding like I’m shouting from a pulpit for everyone to get involved – that YOU can make a difference (in the back of the book there is an address to send donations). But this book can make Sai Sam’s wish come true – the world can finally hear his story.