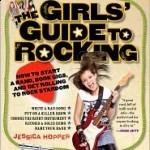 Even though Jessica Hopper lives in Chicago, and thus far we’ve only asked Minnesotans the 6 questions, we made an exception because she went to high school here in the land of 10,000 lakes. Hopper is a music and culture critic whose work regularly appears in Chicago Reader, LA Weekly, SPIN, ANP, and Chicago Tribune and has also been included in DaCapo’s Best of Music Writing 2004, 2005 and 2007. She is also the music consultant for the public radio show, This American Life. She’ll be reading at Magers & Quinn at 7:30 p.m. Thursday, July 16th where she will be joined by Laurie Lindeen (who answered these 6 questions last month), a rocker in her own right

What book(s) are you currently reading?
I am slowly making my way through David Dark’s The Sacredness of Questioning Everything second time–it’s pop criticism and apologetics tied together, a sort of culture war reckoning from the Christian left’s finest thinker. It kind of made my mind explode the first time through, so I am taking another pass slowly to further digest it. I just grabbed Michael Chabon’s Mysteries of Pittsburgh off my shelf this morning for plane reading because it fit in my purse.

Have you ever had a crush on a fictional character? Who?
It wasn’t a crush, but I wanted to be Harriet from Harriet the Spy for most of middle school. Spying on your bougie neighbors banal lives from a dumbwaiter? Pretty much my dream life at 9, so I was in love in a manner of thinking.

If your favorite author came to Minnesota, who would it be and what bar would you take him/her to? I have actually never been to a bar in Minneapolis except to see some shows as an adult, as I moved out of Minneapolis before I was old enough and I don’t drink anyhow. And while I would like to imagine Joan Didion would be open to having a Shirley Tempe with me, I dunno if I would feel like the CC or Grumpy’s would be quite where I would want to have some hang time with her.

What was your first favorite book? Stories for Free Children. It was a collection of kids stories published by Ms. Magazine, I think my mom might have gotten it with her subscription around the time I was born. I still have it–and looking over it as a grown up, it’s full of really heavy-handed feminist propaganda about gender roles–and about how the world is perpetually flummoxed by strong women/girls/female animals doing it their own way. It’s pretty funny, but it explains a lot about how I got to where I am now if my bed time stories were liberation screeds.

Let’s say Fahrenheit 451 comes to life, which book would you become in order to save it from annihilation?
Just one? Joan Didion’s Slouching Towards Bethlehem. And if someone else has claimed it to prevent annihilation, I would say William Least Heat-Moon’s Blue Highways, another book about the twilight of an America era. Didion covers the end of American innocence, the death end of the sixties and Blue Highways chronicles life right before Reagan.

What is one book you haven’t read but want to read before you die?
What is this, The Bucket List? To posit my reading list in relation to my expiration seems awfully grim. My before-I-die book aspirations really only revolve around the ones I intend to write.