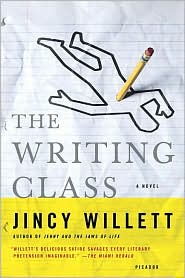 I took enough creative writing classes in college to know exactly who Jincy Willett is talking about when she introduces Tiffany, the student who combs every piece of writing for evidence that women are being portrayed in a way that is demeaning. I also recognized the doctor, who plunked down a dictionary-sized novel-in-progress on the first day of class, and Carla — little talent, but in the front row every semester, parroting back -isms from the professor.

Willett’s most recent novel, The Writing Class, is a satirical poke at those dozen-or-so people who meet once a week to workshop stories, turned murder mystery.

This novel is as hokey as the movie “Clue.” The characters are actually caricatures, and the tense moments are mistimed. It’s very shallow, and a very quick read.

I actually found two editing errors, which means there had to be at least 15 more that I didn’t catch. I think Willett is self-aware enough that she is actually pointing back to herself in this moment, when the class is trying to do the math to determine what time Frank died:

All this business was giving Amy a headache. She had always hated dealing with timelines in her fiction, often ignoring them altogether and counting on copyeditors to fix any mistakes, which usually they did, although in [her novel] Monstrous Women she had managed to graduate a character from high school at the age of eleven and kill off another in the Korean War in 1496. No one had noticed until the birth of the Internet and the emergence of blogs, more than one of which were manned by obsessives intent on illuminating every inconsequential error ever committed to celluloid or print.”

But it is also very cute and funny and sarcastic. Willett, of course, creates a cast of characters that I’m surprised don’t appear in more fiction. (I say this as someone who has only written one short story in my life, which was called “The Writing Group,” and had some eerily similar moments, which leads me to believe that writers are a cliche).

The best bits are when Amy blogs. Her site is filled with lists: Sexiest letters in the Roman alphabet (she says B, but gives second place to a commenter who nominates Y); Funny-looking words (like “kumquat”); and novel hybrids (Old Man Riverdance: Paul Robeson is kicked to death by stampeding Irish robots and National Blue Velvet: Dennis Hopper does something unspeakable with Elizabeth Taylor’s ear).

I’d say its a tossup. I prefer Willett’s short stories, where she does such intimate deep-down soul probing of her characters. If only she’d brought some of that to this. I can’t stop reading her, though. I think she’s adorable.