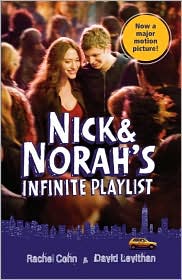 Last year, when I started the Rock & Roll June endeavor (whereby I only read Rock & Roll flavored books for an entire month) one of the I Will Dare readers suggested Nick & Norah’s Infinite Playlist. Since I was mired in the endless Rock & Roll bios on recoupable debt, I never got around to reading it.

Then the movie came out with Michael Cera in it, and it took all my self-control to not see the movie because I really did eventually want to read that book. I have the kind of old-lady crush on Michael Cera that makes me feel like a cross between Humbert Humbert and coo-coo-cachoo Mrs. Robinson, so you can see what kind of self-control it took to not see that movie.

I’m so glad I waited. After actually reading Nick & Norah’s Infinite Playlist, I might not ever see the movie. There’s just no way the movie could do justice to the book’s frenetic, stream-of-conscious narrative that was unbelievably engaging despite the fact that all signs pointed to incredibly annoying.

Told in chapters that alternate from Nick’s and then Norah’s point of view, the book follows the high school seniors through a crazy New York City night fueled by punk rock, heart break, and discovery. The endless night is kicked off at club where Nick’s band, The Fuckoffs (he’s the bassist in the queercore band), has just played. From the stage Nick had spied Tris, his most recent (3 weeks and 3 days ago) ex-girlfriend. Once he’s mingling in the crowd he decides to make her jealous/show her how over her he is, and he asks Norah to be his five-minute girlfriend.

Norah, the daughter of a fat cat, big deal record exec, is a good Jewish girl who goes to the same Catholic school (because her BFF Caroline who may have a drinking problem can’t seem to not get kicked out of the better private schools in the New Jersey area) as Tris, decides that yes she will be Nick’s five-minute girlfriend. She acquiesces in hopes he will give she and an inebriated Caroline a ride back to Jersey.

The two share an electrifying kiss in full view of Tris (who cares only a little bit that her ex and her frenemy are kissing) and then head out with plans of going home. However, Nick’s bandmates slide Norah a fifty and beg her to take him out on the town in the vague hope it will help Nick get over Tris. Before the two can escape, Norah runs into her own evil ex, Tal, an Israeli who she’s had an on again, off again relationship.

Tal’s a jackass who has convinced Norah that she’s not just sexually inept, but frigid. Poor Norah.

So you got two hurting teens hurtling through Manhattan on a crazy night of trying to forget their Exs, trying to deny their attraction to each other, and just generally being stupid teenagers who love music.

The music infiltrates this book, providing a backbeat for all of Nick and Norah’s adventure and the one thing that initially draws them together. Wilco, The Cure, Michael Jackson, the Beatles, Patti Smith, Belle & Sebastian, Green Day, the Clash, Parliament . . . those are just a few of the bands mentioned in the book (the few I can rattle off the top of my head). Anyone who has ever had that spark of attraction and excitement that comes with being musically connected with someone will love this book.

Sure it’s filled with the kid of teenage melodrama that can often cause anyone over the age of 26 to roll their eyes, but the book is so genuine, nailing that desire, the use of the word fuck to express every emotion, the fear of being vulnerable with someone who totally excites you on every level, and the absolute sureness that you will be rejected because this, this is too good to be true.

Is the book perfect? Hell no. The last scene which involves jumping a subway turnstyle is so hackneyed and cliched and, overwrought that I audibly groaned. And there’s Norah’s weird knowledge of mid-90s culture (think My So-Called Life) which seems odd for someone who would have only been like six at the height of grunge culture.

You now what, none of that matters, because the book works. It’s a goobery, teenybopper romance, but it’s charming, well-written (I can’t believe how well the alternating chapters work), and infinitely enjoyable.

I loved reading this book so much I’m a little disturbed. I’m an unabashed, unapologetic Twilight hater. In fact, the legions of thirtysomething woman who rave about these books kind of creep me out. But here I am pondering joining some sort of I *Heart* Nick O’Leary fanclub on Facebook.