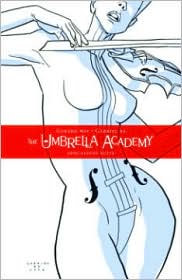 Since The Umbrella Academy Volume 1: Apocalypse Suite was written by Gerard Way of the band My Chemical Romance (whose music I am not familiar with at all), I decided it totally counts as part of the Rock & Roll June project. For the uninitiated, Rock & Roll June is where I spend the month reading Rock & Roll books.

Since I’m knee deep in a few other Rock & Roll books, and since I wanted to start the month off right, I decided to squeeze in this delectable graphic novel in quick. It was a solid choice.

The Umbrella Academy is made up of a pack of siblings destined to save the world. Each member of the Academy was born at the same time, to mostly single women who had shown no signs of pregnancy. There were 40something kids born, and Reginald Hargreeves hunted down and adopted seven of these babies. That was all he could find. He adopted them so he could save the world.

We don’t see the kids in the Umbrella Academy again until they’re ten and they’re saving Paris from an Eiffel Tower run amok. The kids go by two names a name they’re giving and they’re number. We see five of the kids taking care of business, and one, number seven, in a blimp-type thing with Hargreeves being told that she can’t help because she’s not special.

Once the Eiffel Tower nonsense is taken care of we fast forward another twenty years when the gang gets back to together to bury their patriarch. Along the way learn that things haven’t been so happy in Academy one of them, unspecial number seven has written a tell-all book about growing up an Umbrella, one of them left the academy and had a baby, one traveled to the future and got stuck trying to get back, only to return to the present day in the body of a ten-year-old boy, another has become a moon-dwelling half ape-half human Spaceboy.

Oh yes, and then there’s another plot to destroy the world — that centers around Vanya, unspecial number seven, who is turned into some sort of doomsday weapon called The White Violin. It’s awesome.

Do I sound stoned? I feel a little bit like I am while trying to explain this captivating and beautifully-drawn (by Gabriel Ba) comic book collection.

The six books that make up The Apocalypse Suite are dramatic (in story and art), intriguing (what the hell is going on), and satisfying (oh, that’s going on). The Umbrella Academy are a bunch of damaged, moody, superheroes who don’t quite get along and have a lot of parental issues they seem to be working through.

I enjoyed reading this collection so much, that I can’t wait to read the next one. I’m hoping it will pick up some of the many threads dropped in The Apocalypse Suite, because there’s a lot of good material here.