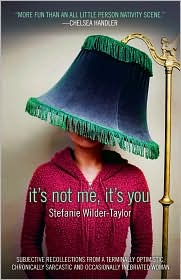 Working in a book store is a dream of many, a reality for few, and the story of my life. There’s the discount, the benefits and, believe it or not, my favorite one is access to reader’s copies of books yet to be published. There is a certain smugness that comes with being able to read a book before anyone else can get their hands on it. Sometimes a disappointment, I found a gem in this one. It’s Not Me, It’s You by Stefanie Wilder-Taylor had me laughing out loud on the first page.

I will admit that had I known the titles of her previous two books were Sippy Cups Are Not for Chardonnay: And Other Things I Had to Learn as a New Mom and Naptime is the New Happy Hour: And Other Ways Toddlers Turn Your Life Upside Down I would have never even glanced past the seductive cover of a head inside a lampshade and a description by Chelsea Handler that reads “More fun than an all little person nativity scene.”

This one is a collection of essays that chronicle her life before marriage and children. Her dysfunctional relationship with her father (predictable), her passing infatuation with bulimia (even more predictable), and her caustic view on it all make this more than just another “Gosh, my life was horrible but it was worth it because I got this great book deal out it” read. She has a comfortable way of writing that makes you feel as if you are there as she searches for the “perfect” therapist to help her through her neurotic trip to adulthood.

From her take on a single-balled Lance Armstrong to finding herself accidentally freebasing cocaine she is believable and makes me want to sit down and compare ridiculous LA stories with her.

Finding that the car that she has moved from the East Coast with is on its last legs, she realizes that there is only one way to find her way out of the tragedy of living in Los Angeles without a car. She will go on a game show and win one. Picking the correct game show, analyzing the strategies of winning and then getting there to compete shows her determination to succeed. She picks “Hollywood Squares” and is on her way. How to make herself stand out in crowd? That’s simple:

The only thing I could think of to say about myself was that I had an unnatural love affair with chimps and wanted to keep one as a pet.

It works, she’s on the show and the rest is history.

With chapters that start with, “Anytime I hear an Ani DeFranco song I think of vaginas” to having a distinctly politically incorrect view of Lance Armstrong:

I do not find Lance Armstrong inspirational–yes, I know he won the Tour de France like a hundred times with only one ball, but he also divorced his wife who stood by him through the cancer ordeal, broke up with Cheryl Crow and seems to have topped off his douchery by allegedly screwing an Olsen twin.

she kept me reading at every available free minute. I love it when books outdo me with shocking statements and make me laugh by showing the exact type of lunacy that exists in the world and I thought I was the only one who sees it.

Too bad that you will have to wait until July 7th to get your hands on this. Well, not too bad, I really do enjoy knowing that I have savored something and you can’t quite yet.