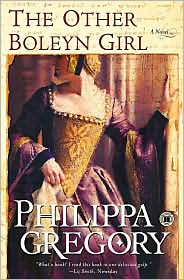 Philippa Gregory creates a historical romance that's more than a little gothic. Castles, kings, turrets, and conspiracies fill the pages. The opulence and excess is to be expected, but Gregory outdid herself in the lush description.

Whether or not the courtly society is historically accurate is debatable, but it is believable. The most striking is the undercurrent of women's rights. Even in the court, women are treated as commodities; bought and traded with bribes and threats and strong women were broken like horses.

Like any great kingly saga, it starts with one be-heading and ends with several.

“Disbelievingly, I saw the head of my uncle bounce into the straw and a scarlet gush of blood from the strangely stumpy neck. The black-hooded axman put the great stained ax to one side and lifted the head by the thick curly hair, so that we could all see the strange mask-like thing: black with the blindfold from forehead to nose, and the teeth bared in a last defiant grin.”
-pg 10-11

The two women at the center of the story are sisters Mary and Anne Boleyn, but it is told through the eyes of Mary. Both girls were raised in the French court and brought over to the English court to win as many favors for their family as possible: coached by a diabolical uncle in extreme and ungodly ways of climbing the social ladder.
Anne is truly a charismatic character. Even in her cruelty, she is not completely heartless. Calculating and selfish, yes: but never without a soul. Mary understands this and stays loyal, knowing Anne's greatest strength is her intelligence, just as Mary's is compassion. They are like two sides of the coin; even their names are intertwined.

She turned on the threshold. 'And don't call me Annamaria anymore,' she said. 'And don't call her Marianne. She is Mary, the other Boleyn girl. And I am Anne, Queen Anne to be. There is a world of difference between us two. We don't share a name. She is next to nobody and I will be queen.'”
-pg 383

This book is about the rise and fall of a great mistress and, like any great scandal, our eyes are glued to the page. In-seeped in this is the treachery of the court and the promiscuity — oh, the promiscuity and lust. Not since Flowers in the Attic has a brother-sister relationship been this scandalous and riddled with devastating consequences.

Our handsome brother lounged at the door with a pitcher of wine in one hand and three glasses in the other. 'I come to worship at the shrine of beauty.' He was quite drunk.
'You can come in,' I said. 'We are wonderfully beautiful.'
He kicked the door shut behind him. 'Much better by candlelight,' he said, surveying the two of us. 'Good God, Henry must go mad to think that he had the one of you and wants the other and can have neither.'”
-pg 390

Gregory's words are fit for a queen and her prose will whisk you away on a fabulous quest filled with witches, monsters, jewels, and true love. At the peak of it all sits King Henry, who just needed an heir to the throne. The book is long and yet, it holds the reader's attention just like Anne held the king's attention long enough to steal the crown.