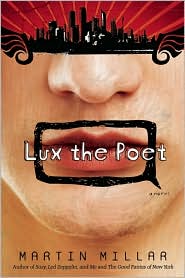 Martin Millar has created a modern fairy-tale, Grimm Brothers-style, set in the ethnically diverse section of London during a riot. Filled with rejection, misdirection, and the missiles of life; Lux the Poet walks through it all like a hippy making a dandelion crown ? completely oblivious.

I love Lux, because Lux the Poet is obsessed with words. Whether it's his rhymes or other poet's verses, he can't go five minutes without poetry. Who can blame him? Without words life simply isn't worth living, no matter how much free cocaine there is, and Lux loves cocaine. Though infuriating to his audience, being him would be damn fun. Can we blame Lux for knowing who he is and dismissing all rejection?

Lux washes off the blood and feels better. Time to get back out and look for Pearl. He feels a little fatigued. What's this bundle of white powder lying on the table?”
-pg 26

Pearl is Lux's muse and true love, but unfortunately Pearl is dating another woman. A non-existent relationship doesn't stop Lux. When Pearl's house is burned in the riot, he decides his quest is to rescue Pearl. Being young with an inflated ego and sense of in-destruction, Lux walks happily into the center of the confusion.

'The prolonged candle flames flung their smoke into the laquearia,' he says out loud. 'That's T.S. Eliot.' The line sort of sticks in his mind because he has no idea what laquearia is. Possibly it is something you spray on hair lacquer with.”
-pg 83

In the midst of the riot are heavenly interlopers. These seemingly defunct and loner characters are a common thread in Millar's novels. Although each feels out of place, they are all connected at an intricate level. Millar excels at creating worlds within worlds with his characters; this time binding heaven and earth. Kalia, an angel expelled from heaven, is attempting to win her place back with good deeds and kindness. Thousands of years of rejection and hardship don't stop Kalia, but Yasmin might. He is an evil angel sent to foil her good deeds, and so, it seems that even heaven is corrupt.

Kalia teams up with Lux on his search for Pearl. She recognized his aura from the millions of years trapped on earth doing good deeds. Lux may be vain as a peacock and obtusely optimistic, but he is also special. In a way, his is Kalia's guardian angel. Some may suspect he was sent from heaven to thwart Yasmin's evil acts.

'Brixton is in chaos,' he says out loud to the whole world. 'All around buildings burn whilst police and rioters battle it out. Somewhere in the darkness a hell-spawned band of heavy metal thrashers are trying to inflict their dire music on an innocent public. Only Lux can stop them.'
?
'Shut up Lux,' says Kalia, and stoops to help a young child back onto her bicycle.
'I can't help it. I'm bored.'
'We're in the middle of a riot.'
'I'm bored with the riot.'
'People are suffering.'
'I'm bored with people suffering. Anyway none of them like my poetry.' ”
-pg 146

Millar creates a chaotic, humorous novel. He keeps the swell of the riot moving as swiftly as the intertwined plot of the characters. There is a feeling of urgency within the pages that makes it hard for the reader to put it down. The character of Lux, surprisingly, is a balancing calm in the riot that none of the characters actually has any stake in. In the end no one, not the riot police, the rival computer companies, the genetic scientists, the thrash musicians called the Jane Austin Mercenaries, or the left-wing press can stop the riot. It dissolves on its own and words, not deeds, may be the key to getting in heaven.