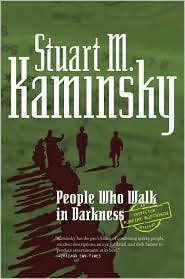 While browsing the bookstore shelves the other day, I was very pleasantly surprised to see a new Inspector Porfiry Rostnikov novel by award-winning novelist Stuart Kaminsky. I had no qualms about buying this book without even looking at the back cover. I haven’t read a Rostnikov novel yet that I didn’t like. People Who Walk in Darkness is Kaminsky’s fifteenth Rostnikov novel, and his first since Murder on the Trans-Siberian Express released in 2001.

Chief Inspector Porfiry Rostnikov and his team have only nine days to break up a diamond smuggling ring or the Office of Special Investigations, and Rostnikov’s team, may be broken up. The explanation as to why leaves a number of questions (one of which is what does this have to do with anything?). It felt like it was there to pad the novel more than anything else.

Rostnikov is sent to a diamond mine in Siberia to investigate a murder. He takes with him Emil Karpo (called ‘The Vampire’ behind his back). His team consisting of Elena Timofeyva and Sasha Tkach are sent to Kiev (which happens to be where Tkach’s estranged wife is living with their two children) to investigate diamond smuggling, while Iosef Rostnikov (Porfiry’s son) and Akardy Zelach keep their part of the investigation in Moscow. The plot becomes unnecessarily clogged with extraneous characters to make this an international intrigue novel. Unless Kaminsky plans on exploring and growing this new path in a future novel, I have trouble seeing the point. It didn’t add much to this story line. And without giving too much away, another problem I had was that the sinister character in London seemed to know exactly what was happening in the middle of Siberia, Kiev, and Moscow as the events were unfolding. (I’d like to know who the guy’s cell phone service provider is that can get a signal in the mines of Siberia.) That being said, it wasn’t all bad.

Two things I most enjoy about Kaminsky’s writing, and which he does masterfully here is his description of place. He has the ability to make you feel like you’re in Russia. Along with scene he also creates a believable attitude of the Russian people. Kaminsky colorfully intertwines his characters’ personal and professional lives. (i.e. Sasha is torn between his job and trying to repair the damaged relationship with his wife, while Elena is tailing a suspect but worrying about putting on weight because it’s in her family genes.)

All-in-all this was not one of Kaminsky’s best works. People who have grown to love the characters will probably like this book because it’s been so long since his last Rostnikov novel. If you’re new to his work, I strongly suggest first reading Black Knight in Red Square (1983) and A Cold Red Sunrise (1987). Still, borrowing a phrase from Porfiry Rostnikov, “It wasn’t unpleasant.”