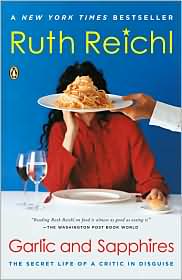 In the 1990s, Ruth Reichl was courted by, and eventually became the food critic for the New York Times — albeit reluctantly. On her first tentative trip to the food capital of the world from her home in Los Angeles, she is recognized by her seatmate. There is seemingly a bounty on the potential critic’s head from the NYC restaurateurs who live and die by the NYT’s star-system. Not to mention, the boisterous recognizer wants to see what Reichl is going to do with the crappy airplane food that is set in front of her.

Garlic and Sapphires: The Life of a Critic in Disguise is Reichl’s story of trying to maintain anonymity in a place where her life story is required reading for restaurant employees. They know all about her frizzy hair and perma-grin. With the help of a theatrical friend of her late mother, Reichl dons wigs and costumes in order to do her job without earning the extra attention that a food critic receives when made by the staff. With these looks come personalities: Molly, a cuckolded doctor’s wife, the cab-stoppingly sexy Chloe, the bitchy Emily, who makes one of her old friends extremely uncomfortable. She also dresses as her mother, and is oddly possessed by the woman — a transformation that stuns Reichl into turning to reader to acknowledge that this costume may require professional help.

Reichl meets wrath from the former food critic, organizes a dinner in Flushing, NY, for a hot shot, and spends a painful meal with a man who calls himself a food warrior, when he wins a dinner date through a charity auction.

Garlic and Sapphires, named for a line in a TS Eliot poem, is okay. Sometimes funny, sometimes boring. Sometimes as contrived and hokey as the end of an episode of Scooby Doo, when the bad guy is revealed. It’s a mix of stories and food and conflict and her own recipes. It’s just not meaty enough or something. More of an appetizer than an entree, pardon my cheesiness.

I wish Reichl hadn’t felt compelled to stick to the traditional story format. Of course every story needs a conflict, but this conflict isn’t as interesting as the wig-wearing, personality adopting, and amuse bouche bashing that comes before it.

Reichl also makes some assumptions about what the reader knows going into the book: Namely, the power of the restaurant star-rating and the heavy-handed Francophile who proceeded her as a critic. Otherwise, when Riechl is sashaying to Korean pockets of town and giving noodle based restaurants three stars, the relative audacity of what she is doing is lost.

(On the other hand, Reichl writing about Asian food is about the best possible relationship that can occur between raw fish, her computer, and your eyeballs. This is the richest writing in her book. And it is also her recipe for Thai Noodles that I will be trying first.)