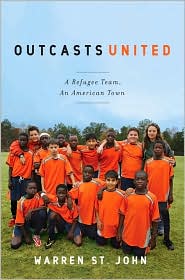 Outcasts United is the second book by New York Times reporter Warren St. John. This book is an examination of a soccer team in suburban Atlanta named the Fugees, a town grappling with its new identity, and the incidents that force people to become refugees.

At the center of the story is a Jordanian born woman named Luma Mufleh, who decided to remain in the United States after completing college. After working and moving around for a couple years, Mufleh ended up in Clarkston, Georgia, where a love for soccer led her to start a team with the hope of corralling the raw talent of many teenage refugee boys. At the same time, Mufleh was also helping both the boys and their families adjust to starting over in both the U.S. and Clarkston.

St. John showed the reader the unique diversity of Clarkston-a town chosen as a resettlement area for refugees-from many angles all throughout the book. Along with a look into Mufleh's personal formation, St. John devoted significant time to the players themselves. These players were witnesses to some of the most brutal acts of violence in recent history occurring in places like Sudan, Liberia, Iraq, Congo, and Kosovo. Along with both the coach and the players, St. John's look at Clarkston's diversity included the residents that have witnessed and experienced the rapid change happening in Clarkston.

As one can imagine, there were and probably still are some issues associated with the resettlement of refugees in this small town. St. John covered many of those that directly touched the Fugees. However, Outcasts United also dealt with bright spots in the town, including the way a grocery store and a Baptist church decided to accept the changing demographics by embracing inclusive practices. The result was a growth of new relationships that benefited both business and the community at large. Phil Kitchin, pastor of Clarkston Baptist Church, talked about how he handles those citizens that yearn for what life was before the resettlements: “I tell people, 'America is changing,'” Kitchin said. “'Get over it'” (177).

There is plenty of diversity and change swirling around everywhere these days. However, there has always been diversity and change in the United States. Telling them to get over it might be a little harsh, but it represents the sense of urgency and emotion we are dealing with in places of sudden and extensive diversity. St. John talked about how large cosmopolitan cities like New York, London, Mumbai, and Hong Kong have been so diverse for so long that their diversity is considered just a part of normal city life. In fact, St. John went as far as to quote sociologist Lyn Lofland from a book on city life: “Civility probably emerges more from indifference to diversity than from any appreciation of it” (185).

The word indifference stands out and intrigues me. While it throws off a vibe of toleration and a little negativity, I tend to think it might be right. In a way, Mufleh had to display this indifference on a smaller scale to make this team play well together; diverse people came together in a common game. However, she also balanced this indifference with a genuine concern for the well being of both the players and their families. This is the key missing from the sociologist's quote that was shown by St. John in this book.