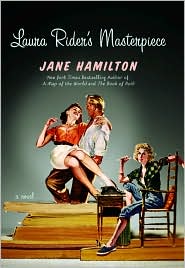 You know, my gut told me Laura Rider’s Masterpiece was going to be disappointing chicklit. But I didn’t listen to my gut. Instead I listened to the voice in my head. That voice was Jane Hamilton’s, who I sew read in 2007 at The Loft. She was there as judge of the McKnight Fellowships (I think) and she gave such a great speech about writing and how even though people keep telling her to write a memoir or something other than fiction, she doesn’t because nobody realizes that those kinds of writing aren’t the same thing. I was smitten.

Then she read from the beginning of her work in progress, a book about a bored Wisconsin woman who runs a garden shop with her husband. It was witty and funny and her main character, Laura Rider, was obsessed with a public radio personality, Jenna Faroli. What she read was funny and witty. So when I saw the book had finally been released, I ignored my gut and followed my head.

I don’t give my gut enough credit.

To begin with Laura Rider has decided she’s done having sex with her husband, Charlie, because he’s just too good at it and she is just too tired, too used up. Yeah. And then she also decides that she wants to write romance novels only she’s not sure how to do that and she needs to figure out what women want. This romance writer pipe dream is some of the strongest stuff in this book. The way Hamilton breaks down the conventions and cliches of romance novels is pretty damn funny.

So, when Jenna Faroli, her public-radio goddess movies to the same small town she and Charlie live in, Laura decides that Charlie should seduce Jenna, who is married to a Wisconsin Supreme Court Judge. Somehow Laura decides this will be good research for her book. I didn’t quite make the leap with her. After a chance meeting on the side of the road where Charlie and Jenna may or may not have seen a UFO-type-thing, they strike up an e-mail romance. Only thing is, Jenna is really being electronically romanced by both Laura and Charlie.

Things get a little confusing once Charlie and Jenna start having sex and he tries to woo her from a separate, unbeknown to Laura e-mail address.

Of course there’s all kind of schmoopy lovey-dovey crap between Charlie and Laura, Jenna’s guilt about cheating on her husband, and Laura’s momentary misgiving about hooking up the two. But most of that is easily brushed aside. Until, of course, a crazy computer mishap exposes everyone involved in the triangle.

The book is amusing enough while you’re reading it, but once the big reveal happens it races to the end in a way that’s not entirely convincing or satisfying. Basically it feels like not-entirely-thought-out chicklit, which is a total disappointment.