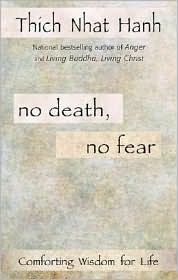 Thich Nhat Hanh's 2003 book No Death, No Fear is another in a long series of spiritual classics by the Buddhist monk. I have nothing negative to say about this book and can only offer four passages that show the essence of this book.

There's a very funny story in the sutras. A woman left a saucepan of milk with her neighbor, saying: “Please keep it for me; I shall come back in two or three days.” There was no refrigeration, so the milk curdled and became a kind of cheese. When the woman came back she said: “Where's my milk? I left milk behind, not cheese, so this is not my milk here.” The Buddha said that this person had not understood impermanence. Milk will become yogurt or cheese if you leave it for a few days. The person wanted only the milk of five days ago and refused to take the cheese. Do you think that milk and cheese are the same or different? They are neither the same nor different, but it takes several days for the milk to become cheese. With the insight if impermanence we can see the truth about the universe and all phenomena, the true nature of being neither the same nor different. (76)

The impermanence of all things is a critical understanding on one's spiritual journey. Once a person learns how to look deeply and see the impermanence in everything, the fear and sorrow often associated with death dissipates. Seeing this impermanence also shows one how everything is both real and not real.

Hanh prefers to use the word manifestation instead of creation. Manifestation implies a transition from one form to another, whereas creation indicates something coming from nothing. Mindfulness involves looking at how everything manifests, including issues in both the physical and psychological realms. For example, people who suffer from a victim mentality can often work through their suffering when they realize how their issues are manifested in part by the decisions and choices they make.

Sooner or later the cloud will change into rain or snow or ice. If you look deeply into the rain, you can see the cloud. The cloud is not lost; it is transformed into rain, and the rain is transformed into grass and the grass into cows and then to milk and then into the ice cream you eat. Today if you eat an ice cream, give yourself time to look at the ice cream and say: “Hello, cloud! I recognize you.” By doing that, you have insight and understanding into the real nature of the ice cream and the cloud. You can also see the ocean, the river, the heat, the sun, the grass and the cow in the ice cream. (25-26)

This is an example of how to look mindfully into something. This practice can be done for anything.

We can use an example that is easy to understand, of a tangerine or a durian fruit. If there is a person who has never eaten a tangerine or durian fruit, however many images or metaphors you give him, you cannot describe to him the reality of those fruits. You can only do one thing: give him a direct experience. You cannot say: “Well, the durian is a little like the jackfruit or like a papaya.” You cannot say anything that will describe the experience of a durian fruit. The durian fruit goes beyond all ideas and notions. The same is true of a tangerine. If you have never eaten a tangerine, however much the other person loves you and wants to help you understand what a tangerine tastes like, they will never succeed by describing it. The reality of the tangerine goes beyond ideas. Nirvana is the same; it is the reality that goes beyond ideas. It is because we have ideas about nirvana that we suffer. Direct experience is the only way. (16)

However, this talk of direct experience goes beyond religion and spirituality. For example, my son and I can sit next to each other on the couch and look at the same cup sitting on a table and be looking at both the same cup and a different cup. This is because our experiences, although the same regarding the general viewing of a cup, are also different. Not only do we see the cup from different angles, but we also bring different biological, psychological, social, and spiritual frameworks to the cup viewing. We can also consider the properties of the cup itself: how the light hitting the cup is constantly changing, how the material that the cup itself is made from is slowly changing, the changing properties of the table it is sitting on, etc. It is impossible for him to see the cup as I do and vice-versa. It is also impossible for either one of us to see the cup the same as the moment in the time that just passed. Since we are constantly seeing different cups, it is impossible to either prove or disprove our experience or the existence of the cup itself.

Thich Nhat Hanh's books constantly earn my coveted 5-Star Rating because they cultivate this type of thought and reflection.