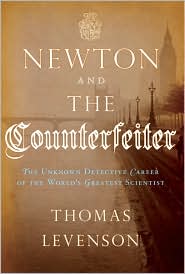 Thomas Levenson's new book Newton and the Counterfeiter is an extensive examination of Sir Isaac Newton's life as a scientist, alchemist, and, unbeknownst to many, a criminal investigator. Newton, a professor at Cambridge, was already renowned for this scientific writings in the Philosophi? Naturalis Principia Mathematica (containing, among many things, his famous three laws of motion). The Royal Crown, realizing his high intellectual abilities, drafted Newton into service to stop the plague of counterfeiting that was pushing the English economy to the brink of collapse. Using the example of Newton's prosecution of lifetime counterfeiter William Chaloner, Levenson showed how Newton used the same scientific mind that developed physical and mathematical laws to prosecute counterfeiters.

Levenson's analysis of Isaac Newtown was no romanticized account of either Newton himself or life in England during the late 1600s and early 1700s. There were many graphic descriptions of the rough and filthy conditions persistent in London at that time: excrement in the streets, piles of both garbage & dead typhus victims, and detailed accounts of both hangings and torture by the rack are common are just a few. Newton himself, while rightly portrayed as a brilliant mind, was also fairly treated through Levenson's examinations of his alchemist attempts to create gold, his strong emotional relationship with fellow mathematician Nicholas Fatio de Duillier, and his borderline torturous (albeit legal) prosecution of Chaloner.

Levenson's book also offered a primer on the English language of the Renaissance era, thanks to his direct quotes from source material. Here is a dandy of a quote from Charloner talking to Thomas Carter, a fellow counterfeiter, and paid informant for Newton. It also shows us some interesting spelling from that era.

Wee have played the fool one with another hitherto for want of an understanding betwixt us but now if you'l joyn with me nothing can hurt us & weel fun them all. (209)

What Levenson did very well in Newton and the Counterfeiter was show Newton as a product of the Renaissance Ideal, the idea of a well educated person that excels in a wide variety of fields. Newton not only was involved in physics, mathematics, & alchemy, he was also deeply interested in theology and natural philosophy. I tend to hold the Renaissance Ideal in high regard because people of this sort have propagated many advances in humanity. The essence of a good liberal arts education is the opportunity for the learner to tap into this ideal and become lifelong learners in both the subject of their major and in a wide variety of other fields. Isaac Newton and others like him are fine examples of the benefits of the Renaissance Ideal. In this era of quick-n-easy degrees, extreme specialization, and lazy thinking, the Renaissance Ideal is sorely needed, in my humble opinion.