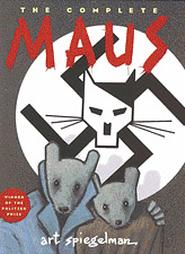 This was only the second graphic novel that I have read. The first was Too Cool To Be Forgotten and was a selection for Rock-N-Roll Book Club. I enjoyed that book. So when said book club was deciding on the next book and I heard that this was a graphic novel, I chimed in my two cents (I am not sure I get a full two cents yet) and said that I would like to read another one.

First off, I think I could become a fan of graphic novels. Oh I am sure there are plenty of crappy ones out there mixed in with all of the good ones, but they have a charm that I like about them. The stories seem to move quickly and both of those stories sucked me in right away and kept me turning the pages. Plus, I could get through them in a matter of a couple hours really. I have gotten just as much enjoyment out of these two books as I have out of standard novels, which take up much more time. Not that time is a huge factor, but when I get into a good book I don’t really want to do too much else but read until its done. Maybe its just because I am lazy and if someone wants to draw little pictures to save my feeble brain from having to do the work internally, I’m all for it. I dunno, I just dig them so far.

On to Maus by Art Spiegelman. This book chronicles the life of the Vladek Spiegelman, the author’s father, from his upbringing in Poland before, during, and after WWII through his trials in Auschwitz to finally living in New York. The story is told while Art is writing a graphic novel detailing his father’s life. The information comes to Art through interviews and discussions with Vladek, all the while Art is struggling with his relationship with his father and struggling immensely trying to wrap his head around the stories and trying to figure out how he can accurately describe and illustrate his father’s life.

All of the charters are portrayed as animals, Jews as mice, Germans as cats, Poles as pigs, etc. and I think that distracted a little bit from the story and made more of a disconnect from real life. Some might think of this as a “standard concentration camp” story (not to sound crass), and I would guess most of us have heard or read stories that are very similar about all of the struggles families went through during that time. I think it was done very well and seeing things from the perspective not only from Vladek, having been there first hand, but also from Art’s point of view, often pretty much saying “holy shit, what did you do next,” was very touching.